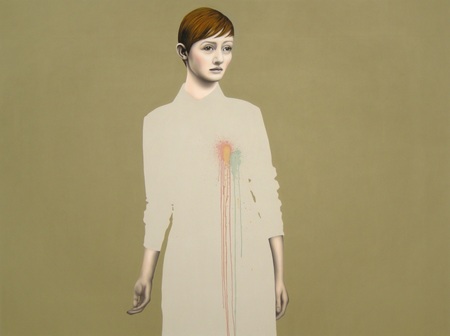 Reality is not truth
By Thomas W. Kuhn

Human reality is a many-layered structure formed by the sum total of myriad perspectives and interpretations of the facts; it continually alters with the constant current of change. Communal considerations and individual musings combine, suggesting the idea of a complex society. Art possesses the potential of allowing an awareness of this complexity to emerge in the beholder, without reducing the meaning in a simplifying manner.

In her pictures, Sandra Ackermann traces and investigates such complex mixtures of social and personal concepts. In the last few years she has, by placing pictures within the pictures and by the playful juxtaposing of foreground and background, developed a visual language in which meaning is intensified by an exciting rendition. Along side this, we find her continuing interest in surfaces such as skin, textiles and hair; from these her painting draws its suggestive force.

Women serve as a guiding theme , who, more often than not, are adaptations of fashion photography and possess a specific, unique pathos. They serve as orientation for the viewer, perhaps even as identification figure, and operate similarly to a personification in an allegory. These elegant women embody societys self-image, serving not merely as vicegerents of the beautiful, but as condensates of desires.

Other elements, too, originate from the collective pictorial memory, though from other sources. Pictures like those of a tank, a high-rise apartment building, a globe, or a burning human are not mere amendments, narrative anecdotes, or attachments to the actual paintings. These visual themes become dynamic counterparts of the women, and, as such, at times undermine and question the original function of depicting beauty. Fashion itself is familiar with shock elements and the transformation and integration of violence. Military clothing, for instance, was one of the most important sources of inspiration for the fashion art of the 20th century. Camouflage patterns adorn not only warships and tanks but embellish t-shirts and wallpaper. The question whether this transference charges the design with an aggressive moment or, rather, softens the design of power, remains unanswered.

By bringing seemingly disparate elements together, Sandra Ackermann triggers a series of associations that might lead each of the different onlookers to relate what they see to his or her own specific life and situation. The sometime quizzical constellations of the pictures raise more questions than they offer answers to with their myriad meanings. Here Sandra Ackermann reminds one of the notoriously famous Songs of Malador by Lautrémont and the metaphor of a random meeting between an umbrella and sewing machine on a dissection table. Applied to painting the dissection table would be the canvas, on which the play of the various levels of reality is performed. The realities have much of the reality of dreams, in which, likewise, the most astounding encounters and turns of plot are made possible.

At times, the closed eyes of the protagonists, as is the case in the pictures Die Springer or Im Regen, allude to dreams, or to the act of dreaming. Closed eyes pose the question of the internal picture, or the inner perception of a situation. What sensation, what vision is prompted by the raindrops streaming over the body of a woman? Are the onlookers given possible insight into the phantasms of the kneeling women, who, as is the case in Springer, conceal their eyes with their hand?

The subjects clothing becomes a kind of portal that opens the view on another picture, and although these pictures within the picture do not align with the curves of the women, as would be the case if the motives were printed on the clothing, it is nevertheless near impossible not to connect the motive of a burning person or that of workers on a high wire mast with the clothing, and thus with the person wearing the clothing. These examples alone serve to show how the pictures within the picture contrast with one another. If clothing really were to be imprinted in such a way, one would rightly speak of a perverted society, in which a human drama such as the burning of a human is turned into décor. In connection with the Benetton campaign by Oliviero Toscani, and after extensive protest, precisely this question was discussed. Fashion possesses a seldom acknowledged critical dimension and explosive power; Sandra Ackermanns paintings feature such dimension and power, and ask just these questions.

At times, stylistic elements of clothing or other motives have a nostalgic character. Obvious historical elements, such as an old aviators cap from the thirties or a cocktail dress in the style of the sixties, not only add a certain facet of recollection to the paintings of Sandra Ackermann, but are literal representatives of the theme of remembrance alluded to by the term Bildgedächtnis (collectiv visual memory). This, though, is not historically correct. The human awareness of time, particularly that of past time, is prone to change in such a way that every time a differing picture of reality emerges. Fashion, too, recovers past stylistic elements. One might even refer to this form of remembering as recycling  as it is, the present appears to be a continual act of bringing the past to mind, and this, in turn, blends with the more recent events.

The sustained and continual experiencing of time are themes found in the allegorical character of Sandra Ackermanns women, whose composure appears at rest, even in moments of high pathos. The permanence of composure almost removes them from the here and now, they become timeless, much like saints in more traditional painting. A parachutist or an ascending space shuttle are, on the other hand, entirely caught up in a temporary process, that manifests the passing of time, and impermanence as such. And, again, the combination of motifs reveals a contrast. The pictures stand with one foot in the past and with another, due the choice of motif, in the perpetual present.

As we consider the work, we also discover a similar fusion of the past and the present in a series of adapted portraits of past masters that Sandra Ackermann completed in 2006. One of these is Dorothea Kannengießer. The picture refers to a study by the younger Hans Holbein of his so-called Madonna of Darmstadt. Sandra Ackermanns rendering of the mentioned study is done in a particularly for painting exceptionally exciting way, in that she paints the face, which is tightly wrapped in bands, in an illusionistical manner, while the contour of the clothing is not so much painted as hinted at. The sketch or the tracing for the final picture is here made permanent. This pattern Sandra Ackermann has since transferred to a series of recognizably more contemporary women and, by so doing, formally places them in a timeless community with Dorothea Kannengießer.

Sandra Ackermanns painted collages are an entwined combination of intuitive and controlled pictorial elements that, as a whole, offer, potentially, both poetical and critical meaning. The highly stylized composition of form and motif reveal not a turning from reality, but, instead, present a contextual exaggeration and reduction therein that often clash and drift apart. Sandra Ackermann herself refers to her pictures as mirrors as beautiful as advertisements, yet truer in emotion; for they are in possession of no immediate value outside themselves. They exist to give the feeling I have of the world, in which I live, an illustrated expression. And it is this feeling that generates meaning.