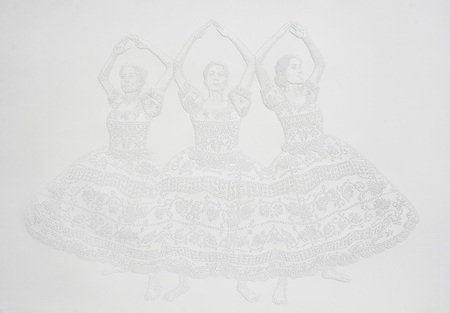 Opening: Friday, July 6, 2012 from 7 - 9 p.m. The new works of Sandra Ackermann deal with the demarcation between the outer and the inner reality and the attempt to point out precisely this demarcation. The particular theme of the paintings of the new work cycle entitled "I look inside you" is the concept of being trapped in a reality, which cannot be understood - a world in which finding one's way seems impossible. Although the paintings by Veit Ferrer, master student of Gerhard Richter, are usually created from photographs or other pictures, they still all refer to things lying behind . Consequence is, that the images lose their original documentary character. Rather, they can turn into a subjective statement about painting, reinforced by the artist so typical exaggerated colors and rastering images by mathematical formulas. In this sense, the works of Veit Ferrer are not to understand as detailed mapping of the world. They are like a study on the possibilities of painting whose starting point is less anchored in a concrete process of painting, rather than in an abstract idea. In his latest paintings the central theme of the Italian artist Davide La Rocca is the film by Andrew Niccol, "GATTACA". Alongside his known paintings in different shades of gray, that are calculated by the computer and applied on the canvas point by point just like pixels on the screen, La Rocca now presents works, that are quite related to the principle of Op Art. Those works are consequently painted in black on white or white on black and combine abstract, optical paintings with portraits of people in everyday situations. The paintings of the Dutch artist Jurriaan Molenaar show architectural structures, interiors, or faces of conceived buildings. All rooms and environments come along with a certain blankness. There are no people, no properties, nothing that allows the viewer to interpret the scene. As the artist explains his passion for these buildings: "Just like us human beings, a house has a certain character and arouses different feelings and emotions". To create a balance of the inner and the outer, of being open and being closed, and of feeling security or claustrophobia, is what Molenaar is most interested in. In case of the buildings, the bridge from the one stage to the other is represented by the windows. They raise questions of "Who am I?" and "What do I see?". However, Molenaar does not want to answer those questions too precisely, because he thinks that a good painting should hide more than tell. The title of the show - named after a short story by Samuel Beckett - indicates the absence the artist wants to illustrate, as it is much more interesting to search for information the work does not give, than to find out what it shows. Because you cannot find any decoration that could help characterize the spaces, the viewer has a broad diversity of interpretation. The Spanish artist Amparo Sard uses a variety of different media of expression for her work, such as drawing, video, installations and sculpture. In her drawings, Sard embroiders stories on paper and provides plastic forms with a corpus to desecrate the bidimensionality of the support it is being created on. It is an absolute monochromatism, white, reminiscent of silence and loneliness and exploring themes of identity and restriction. By using a unique form of pointillism, Sard creates works on paper as well as space-filling sculptures fashioned out of a wide variety of materials. Her works consist of thousands of pinholes, forming complex illustrations, which can be qualified as "pixeled embroidery". Works by Amparo Sard can be found in collections of the MOMA, New York, the Guggenheim Museum, New York and of the Deutsche Bank, Berlin and New York. The Canadian artist Kate Waters captures random everyday scenes and their ambience with her camera and transfers them to her impressive paintings. The titles of the paintings suggest an often ironic understanding of the ambivalent situations and make the often too serious of subject matter bearable. Cultural clichés and archetypes of the present leisure culture are furthermore exposed and examined from different angles as well as promises and expectations of society. In this case the title "Cheating hearts" not only deals with a popular theme in country songs but also with the fragility of the American Dream and the cheated participants in trying to find absolute happiness in the unknown.