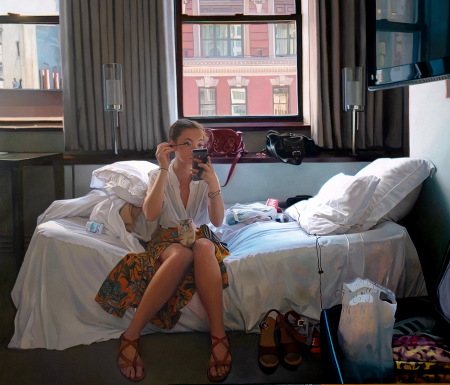 Kate Waters
Apotheosis of the real

Kate Waters' painting is exceptional. This categorical statement responds to two quite obvious reasons. The first is that her work updates the fact that every image is inscribed in an already established visual genealogy; the second is that every representation is an act of personal fiction turned into a kind of apotheosis of the real. The technically exquisite images are reminiscent of many images that in turn are reminiscent of others, but they are untransferably unique, they are her own. These works certify, with meridian clarity, that the rhetorical detour is the fundamental matter of the pictorial fact. They are works that, using tropology and metaphor, move painting away from that degree zero that has so much to do with complacency and decoration.

The artist emphasises the allegorical and narrative character of the image. Waters surfaces, apparently calm and stable, unleash a sea of reflections on the paradigm of contemporary life: its excesses and contradictions. Art as an event in the world, and painting in particular, does not limit itself to the bare reproduction of reality, but attempts to manage relations of complicity - whether affective or questioning - with that reality which is outside representation. Hence, Kate Waters painting should be understood as an active aesthetic experience that is lucidly organised on two basic principles: the power of interlocution of the image and its performance in the auscultation of the dramas and pleasures of this world.

On the other hand, Waters pictorial proposal borders on the field of ontology, since her images propose a reflection on the pictorial fact itself, forcing the tautological aspect of language. Kate Waters is very clear that painting is not only a more or less well-articulated system of signification; it is also an act of locution. Painting speaks, narrates, describes, suggests and communicates to the same extent that it engages in simulation, lucubration, deviation, metaphor and illusion. Underneath every glamorous surface there is almost always a tense or tragic situation. The images contain what I would like to call suspicious stillness.

Kate Waters handles, with enviable eloquence, the resources of suspense and the principles of intertextual narration. The artist's pictorial-narrative discourse seems to dialogue with two horizons of communication of very different sign and thickness: the journalistic essay and the language of film. Waterss pieces report a reality while at the same time articulating a system of coded illusion in which the quotation and the intertext are at ease in the interstitial spaces of the pictorial surface. The transitory and the provisional, the event and the conjunctural, seem to be the zones of greatest attraction and fascination for Kate Waters, who observes the world from a place of curiosity and wonder.

The terms illusion-reality, private-public, concrete-evanescent, restitution-definition, acquire a particular meaning in the emphatic context of her painting. The ensemble of these pieces is understood as a semiotic body of very different meanings and magnitudes, as an X-ray of modern life and an architectural space in which pleasure and death, truth and lies, theatre and life inhabit. The paintings of this artist provide the spectator/interlocutor with a sphere of constant realisation and alienation. If we accept that the act of interpreting and reading a pictorial work involves a displacement from the denoted to connoted meanings, then we must also accept that critical interpretation becomes - by right - an act of co-creation that gives added value and a will to learn without having to question the limits (and drifts) between the artist's intentions and the critic's digressions. Work and text, in their unity and as a whole, are thrown into the foundation of a new map of sensibilities and meanings.

There is something in Kate Waters work that I find fascinating, and that is the specular trickery that can be seen in the surfaces and the systematic interplay of gazes that is strained between the characters in the painting, the context and us. There is a kind of melancholic fixation, a sort of retruecan, an obsession, which far from being a problem for the spectator becomes a guarantee of seduction. The Artists spectacular mastery of pictorial matter, her skill in capturing and synthesising an external image and her virtuosity in constructing scenes that seem to come out of a literary text, enhance his capacity to engender illusion, arbitrate utopia and describe the essentials of life.

The dramatic and persuasive in this artist's work occurs through an analogy that explodes the relationships between the theatrical and the real, between the true and the simulated, between the past and the present. These analogous relations reveal, on Waterss part, a profound knowledge of accidental painting and of the History of Art in general. It is precisely this knowledge that favours the play of quotation and allegorical displacements that her painting manages so well. The maxim "knowledge is power" is fully fulfilled in her proposal. Kate Waters knows, and knows enough, to make the work a locus of multiple and even antagonistic meanings. There is no need, even, to identify or compare each scene with real life or with specific events in recent history.
In accordance with my observation from a distance and with my levels of understanding of art, I can affirm that with regard to Kate Waters' painting it is possible to discern four substantial orders of aesthetic and discursive action: a) the recycling of postmodern sensibility as knowledge, b) the narrative power of the image as description and illusion of the real, c) the emotive-conceptual belonging to a tradition endorsed by good work and c) the settling of scores between the photographic record and its subsequent conversion into painting.

Having said this, it goes without saying that we are in the presence of an excellent painter who manages to administer the devices of representation/ alienation/digression with mastery and skilfulness. Kate Waters painting builds a bridge - a safe, reliable bridge - between reality and its aesthetic prefiguration, between the anorexic distance of the hegemonic media and the bulimia of social networks. Her paintings do not cease to be the object of retinal enjoyment while value judgement and criticism accept that the work of art is, among many things, a wound in the fabric of history.