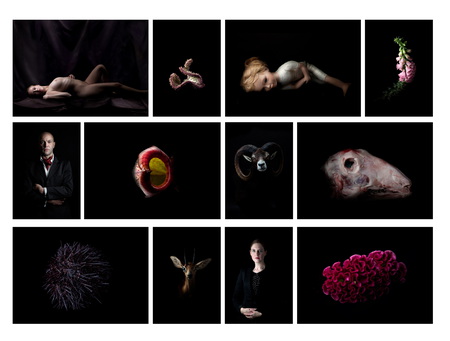 PerSe  The portrait and the nude as pictorially staged film still The pictorial moment in Claudia Rogges work culminates first and foremost in her modern triptychs, particularly in how freshly she reflects the idea of the portrait and the nude. Each image in the new series per se contains a human portrait, which seems to be frozen. As such it represents in an enthralling context the de-individualization of a species predestined to individual realization. In the center of a traditional religious format, cowering or interacting nudes and lascivious beings are represented, very similar to the actors in the nude series Ever After and Lost in Paradise. On the table on the right, a stuffed animal is put on show, which, although dead, exhibits lifelike features. Claudia Rogge knows the periods of art history from which she draws her creations. So we can confidently understand the triptychs with the descriptive title Elements and Structures as parts of a whole whose components stand in relation to one another. The triadic structure fits in deliberately with the work of Claudia Rogge, which built upon itself series by series and now strives towards a certain veracity. The structure has always been apparent. Originally it was used to structure the images themselves and later structure the images in terms of content. Per se references something fundamental, even elementary. When you look at the series, you ask yourself where art ends and reality begins, where the living models differ from the stuffed beasts. This calls to mind on the one hand reflections on transience (and the transience of the individual) and on the other conservation (in the mass). In any case, the photographer returns again to a concentrated design. Yet she too carries forward the continually re-worked and newly won realization that grips her creations like a vice: Masses and crowds, individuals and dividuals are just two sides of the same coin. The dynamics of her works set a great movement into motion, which pauses once in the form of an ornament and again in motionlessness, in standstill. Claudia Rogges method of working is similar to that of a surrealist film director paying lip service to painterly traditions in order to fix them photographically  in the filmic style of an invented film. Each individual image that forms part of a differentiated and monumental series contains within it a frozen moment, which can be thought of by the observer as a moment in a film. The balance between unemotional and theatrical choreography and aesthetic emotionality, between pathos and inner reflection is what makes her work so fascinating and can be seen in what is  for the time being  her most accomplished series to date. Text: Günter Baumann