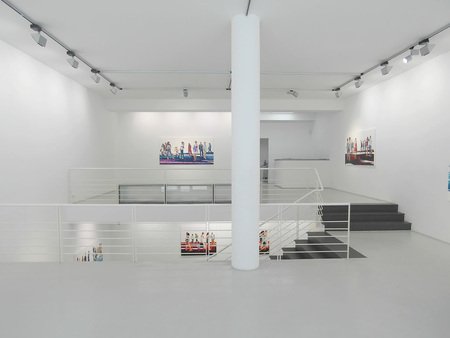 Opening: Friday April 12, 2013 at 7 p.m. "From the aimlessness and decisions weakness because of excessive demand in the affluent society follows the Option Paralysis: The tendency to opt for nothing by unlimited selection ". Charles Hamblett, Jane Deverson: Generation X "Generation Why" titled the Italian artist Corrado Zeni his new series of paintings, which opens to the viewer an infinite space with from each other isolated figures. Like the flaneur at Charles-Pierre Baudelaire, the artist captures in his works the atmosphere of the big cities. "Generation Why" reflects a vibrant metropolis, which constantly reduced our free space by the emergence of crowd. One searches for an aesthetic place for breathing the air. So takes the artist the visual quote of "Generation Y". Zeni's works do not represent the architectural motifs. Rather the figures are positioned on a white background. The bottom is replaced by a clear, expressive gradient. The white spatial emptiness emphasizes the individual figures and emphasizes the attributes of the "Generation Y". Phones, label bags, sneakers or IPads characterize the people of our time. It can be seen that the illustrated people are removed from the urban everyday life situations. Some stand or walk closely together, without communicating with each other and without requesting a dialogue with the viewer. They try to remain anonymous by hiding their faces. They posture reinforced that request. It builds no external barrier between the viewer and the unrelated portrayed person, nevertheless the posture of the figures makes it impossible to engage in what has happened, to be part of the action. We can view judge the "Generation Y" only "from the outside". What distinguishes this generation in the turn of the century? Zeni's works give no clear answer to this question. They document the contemporary life and modern society on an abstract background, in it on the one hand, disordered, fast-paced nature and individualistic perceptible existence on the other.