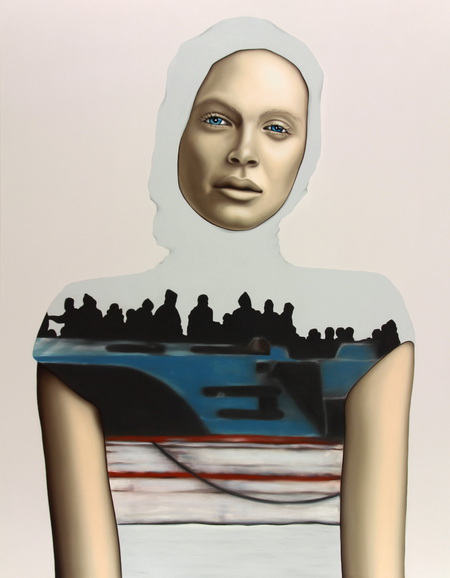 In her works, Sandra Ackermann mostly depicts lone female figures who position themselves fully or at least partially against a background or they merge into it. In her paintings the artist frequently deals with the topic of self perception of different human identities in contemporary society, which is characterised by media ambiguities and political debates. In the course of this, the depiction of these aesthetically attractive female figures acts as a kind of backdrop behind which a play called "Reality" unfolds itself to the spectator.

Ackerman's figures are female flâneurs. They consume what has happened around them and reflect this through their own individual perception. The work "Floating" could be read as a sort of x-ray image of the consumer society. A reflection of what has happened has been incorporated into the figure that is shown. However, her gaze seems to be cold and empty. Although the figure looks precisely and directly at the spectator, the actual events on the inside are not fully reflected but, instead, remain trapped in a dark and impersonal mass.

Ackerman's works contain suggestions and criticism of social norms and, at the same time, they do not seem to be provocative or shocking. Rather, this is an aesthetic connotation of the interplay between "my perception" as an individual and what has happened "around me". The work "Bleiben will ich wo ich nie gewesen bin" [I want to stay where I've never been before] is the realisation of an almost blurred line that divides what is still reality from abstraction.

The visualisation of social and political arguments is reflected in Ackerman's works in condensed form. It is always the composition of naivety and aggression that is combined in the depicted figure such as, for example, in the picture "Blom Ba Dom". At first glance, the spectator is confronted with a depiction of a fun-loving young female baseball player. On closer examination of the picture, fragmentarily depicted soldiers emerge and they blend into one another with the figure of the girl. The work has a clear socio-political reference. Here, the question about the judge or the victim, or about fiction or reality remains open.