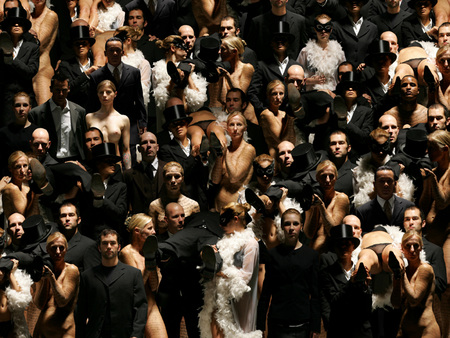 The beginning of modernism, whose roots go back to the age of enlightenment and the beginning of industrialisation in the 18th century and which reached its first heydays in Western metropolises in the 19th century, was accompanied by the development of two seemingly paradox and contrasting phenomena, individualism and mass society.
The trend towards uniformity of economic systems, mass transportation and mass media, which we nowadays associate with the term globalisation, also leads to a certain uniformity in peoples life designs. That is why many people want to stand out from this homogenous crowd. The various forms of subjectivism and standing out from the masses that were tried out in the first avant-garde movements since romanticism by artists, actors, and poets became a model for an individualistic concept, whose mirror image was reflected by fashion and its two extreme representatives, diva and dandy.
Once daily needs are covered, and often times even before that, people begin to display their own individuality, from clothing and hairstyle to piercing and tattoos; all this is intended to ascertain their uniqueness within a mass society. And where this striving for individuality goes hand in hand with lifestyles that seem to contradict traditional ideas and values, it is once again the object of intense criticism from orthodox religious circles of different origins and is regarded as a pathological symptom of a decadent Western liberal lifestyle.
It is from this sociological development that Claudia Rogge derives her central theme, the relationship between the crowd and the individual. Her central thesis, however, reduces the dichotomy between crowd and the individual to absurdity. For her, individualists are also representatives of a role model, whose different ways of expression, in the last analysis, can be traced back to social conventions. She does appreciate this striving for individualism, which is closely linked to the pursuit of personal freedom, because it extends the individuals range of options to act, but in the last analysis it remains a first or second order derivative of accepted social standards, to which it remains structurally linked  even in its provocative negation.
Claudia Rogge has sounded out her subject matter in different ways and with different strategies. Following her work in the public space with her two projects mob il 1 and mob il 2, the first one being multiple reproductions of babies heads and the latter one multiple reproductions of crouching men, which she exhibited on her glass-sided truck in many European cities to trigger off an open discussion, she moved on to photography and thus entered the space dedicated to art in the narrower sense of the word. Each of the pictures of her Rapport series, which was first exhibited at Voss Gallery in 2005, shows individual human beings, mostly in a static pose, whose photographs were mounted into regular groups with the help of a computer. Intersected by the image borders, these groups seem to extend far beyond the visible space, and they produce a striking perceptional-psychological effect, which consists in the attempt of our perception to comprehend each individual figure as a single real-life person in spite of the apparent identity of the models that are multiplied in the picture. Even before the onset of any rational thought, this contradiction generates a tremendous suspense, which can only be broken, if the concrete form of human bodies gives way to their perception as a pattern repeat. Accompanied both by the fascination and horror of uniform, well-disciplined crowds of people, an ambivalent field opens up, full of associations, ranging from the military to prisoners camps, sports and variety shows. After a series of other works, in which Claudia Rogge further explored the topic of pattern formation, by arranging figures and parts of the body into ornamental configurations, which, as installations, could then be used to decorate walls and floors of rooms, in her current pictures she now differentiates the crowd in a new way. The pictures at the U N I F O R M exhibition no longer depict single models in largely static constellations. Her new pictures are characterised by an encounter of different protagonists in spaces full of action and determined by movements. For this purpose, she took pictures of her models in several postures and in different sequences of movements, a process, which increased Claudia Rogges workload tremendously, since she now had to look at about 10,000 pictures, select them, and process them on a computer for photo-mounting. Her photographic work was preceded by an analysis of masses with a view to identifying basic role patterns, which the protagonists of her pictures embody as role models. These protagonists form the iconographical background for a deeper understanding of her pictures, in analogy with the personifications of an allegorical concept, which was used in the Occident to illustrate types of being, types of action, and ethical concepts.
Claudia Rogges prototypes carry poetically sounding names that convey their meaning. Names like the female catcher of souls, the criminal, the icon, the relevant man, the woman that is being evaluated, the unworthy, the conservative woman, the spiritual man, the follower, the intruder, and the one who passes judgment. This does not mean that these prototypes are tied to a specific gender, nor does Claudia Rogge claim that they all exist in their pure form. In real life, these prototypical aspects always exist in a mix, and yet often individual aspects dominate and determine the perception of others and ones self-perception and define the position and the action of the individual within a crowd.

Like in her rapport series of pictures, spatiality is created by the arrangement of the figures inside the space of the picture and through the perspective she chose for the shot. But from picture to picture, this arrangement follows a different, complex choreography. The picture, in which Claudia Rogge simulates a Mexican wave, forces the viewer to envisage a grand stand full of naked protagonists. Her pictures, in which persons are running towards a centre, or away from it, however, point to a space with an oblique upward inclination. In other pictures, plane surfaces are the ground, on which the figures are placed inside the space. The lighting atmosphere is dominated by a dramatic setting of light against dark, which reminds us of the tradition of Caravaggios chiaroscuro, and instils a stage-like presence into the situations she depicts. Of equal importance is the flesh colour of the skin of her naked prototypes, above all in relation to the apparel of the others, which follows an almost monochrome scale of mostly dark hues. Whereas one part of Claudia Rogges prototypes are defined  in Gottfried Kellers spirit - by the clothing they wear, by the costumes that reflect their role in society, the other part is defined by their bodies, which describe them in part, in the double sense of the word. Thus, sections from Robert Musils novel Man without Qualities cover the body of the unworthy. In addition, others are permanently marked with tattoos. These characters, which run in parallel across the bodies, can be perceived as a pattern that resembles a leopards skin. And in this way, groups of naked bodies, sitting or crawling on the ground, acquire an animal expression, which may even become threatening when they move towards the onlooker.

The different pictures in the U N I F O R M exhibition, whose protagonists are presented individually in separate and full frontal pictures in a separate section, can be interpreted as specific patterns of social interaction within a crowd. Not only individuals can be role models for a pattern that questions their own individuality; also when acting what is perceived by society as our own free will, we very often follow well-established rules, which sheds a critical light on the highly-praised freedom of decision. And these questions are up for discussion. But Claudia Rogges pictures are not just limited to this; over and above their critical potential, they have an aesthetic power, and maybe she herself appears as a seductress in them, since searching for ugliness in her pictures would be in vain