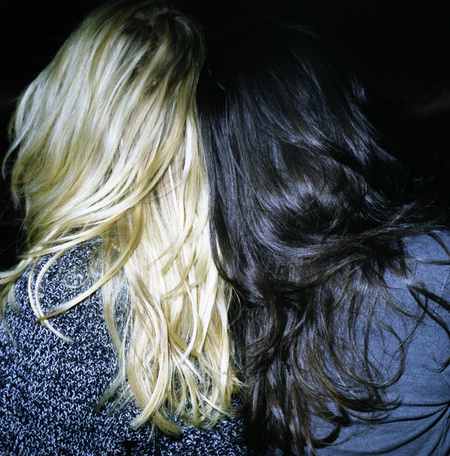 "Forever More", those words express a highly promising but in reality a rather futile hope: "Forever more" - definitely not a vow for the mortal, but still, Michael Koch makes this promise with his collection of photographs, showing the balancing act between the stageing and psychological analysis of the models. This exhibition focuses on the veering between control and loss of control, not only between model and artist. Michael Koch detects artificial moments, depicting this interplay in a most eldritch way: in disclosing the artist, they cover the model, in divesting the model, they hide the artist. The artificial seems to be natural and vice versa. A key piece for this method is "Eldur": A glaring flash light rips the sunburned skin as well as a stigma on the neck of the depicted man out of the dark. The irrational of the claim "forever more" is reflected in ecstatic works like "Maya". Who or what does the model abandon herself to with closed eyes and open mouth? What happened to "Nero", lying that relaxed on the venetian floor, his back totally flayed? And how can "Kali", an indian goddess closely connected to death, witness life, whereas "Phoenix" meets reincarnation with open eyes? Not only his images, but as well the way of arranging them are a means to disquiet the viewer. The pictures not only stand for themselves, they extend their meaning in interaction with the other works. Koch is not trying to find harmony. His works tell about the antagonism that only refers to beauty, when it has the courage to face human imperfection. Michael Koch examines the vulnerable parts of our being, renders them powerful and arranges them with his own act of divestiture. Thomas W. Kuhn