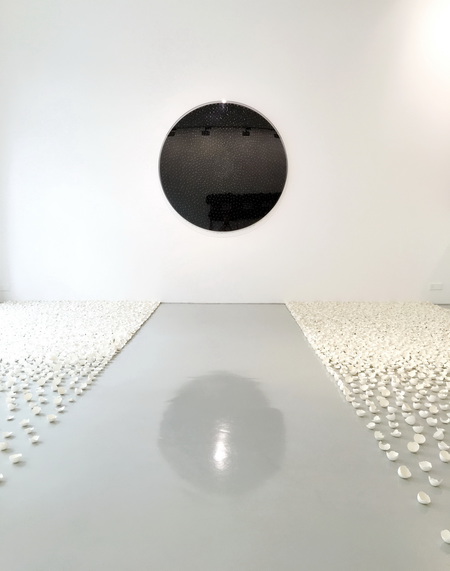 Peter Adabahi Uka - Daniel Heil - Jennifer López Ayala - Kotaro Nagira ()Did I stand on air then, invisibly taken to some unknown world, some nowhere? Where was I then? I was whole but felt an unseen line divide me, send my strong half forward keep my other timidly at home. I have always lived that way, crossed borders resolutely while looking over my shoulder. From the poem Borders by Leslie Norris All societies are defined through borders and crossings. In the modern world, national belonging is usually encompassed by visual state borders. Social membership is expressed through passports and citizenship. In the natural world we are confronted with the visible confines of change, which manifest themselves through the seasons. Other borders are less obvious, nevertheless, they can still be expressed or visualised through art. These are the cultural and social borders that can play just as big a role in peoples lives. These dividing lines alter and affect the emotional substance of a human individual. Political views, ethnic identifications and the perception of values and concepts are actively reflected and consumed by us. The Crossing Borders exhibition deals with the topic of the depiction of borders and visualises this by means of four artistic positions that could not be more different. Through their works the artists want to uncover the invisible border between the global forces of nature, its transfer to specific individuals and the resulting subjective human perceptions of the social environment. The influence of nature is particularly noticeable in the works of Daniel Heil, a painter from Düsseldorf. His works abstract themselves on the basis of tumultuous overlays and they focus on accentuating a vivid abstract form that is nevertheless, at times, disturbing and fractured, too. His works constitute an attempt to illustrate the diversity of nature with a perfectly reduced line. The deceptively empty spaces in Heils works are an invitation to engage in an inner dialogue that, as a starting point for introspection and ones own perceptions, is stimulating. Heils contribution to artistic architecture in nature can induce onlookers to escape from the way they normally see things and to sensitise the subconscious. The crossings and transformations theme has been given similar treatment by the artist Jennifer Ayala Lòpez, although she employs different media to create her works. She uses up to 100,000 broken eggshells to create a pictorial staging of the colour white. In doing so she seizes on the optical phenomenon of flickering white nuances that are created in each magical moment when the light hits the broken edges of the eggshell  a moment that picks up on the pointillist approach to light in painting and translates it into a new form of spatial painting. In her works, the boundary between the material and the space remains open. The installation, the onlooker and the rooms merge together into one artwork. The social aspects of crossings in specific countries of ethnic origin, such as those of West Africa and Japan, manifest themselves in the works of Peter Adabahi Uka and Kotaro Nagira. Peter Adabahi Uka combines the memories of his childhood in West Africa and his life now in Germany in a complex vision made up of intimate recollections and transfers them into his paintings. It is only the human presence that remains concealed behind the scenes of poverty. These idyllic landscape depictions reveal, among other things, abandoned houses, wrecked cars and demolished schools. Ukas works highlight, on the one hand, the disruption of a romantically aestheticised natural world and, on the other hand, the personal odyssey of the people living there that bears a poignant testimony to an extraordinary struggle for survival. In his textile works, the artist Kotaro Nagira, who was born in Japan, conveys a critical attitude towards modern Japanese society. In his work called Borderline he expresses his thoughts and feelings about consumption and waste disposal. The jackets that have been woven together symbolise spatial volume and intimacy. His works always touch on the boundary between the private and the social and point to the values of day-to-day social life as well as the zeitgeist. The mix of artistic works in the Crossing Borders exhibition leaves open the secularisation of the natural world and of society and it is up to each visitor whether to accept this or to ignore it. Text: Sofia Sokolov, Düsseldorf