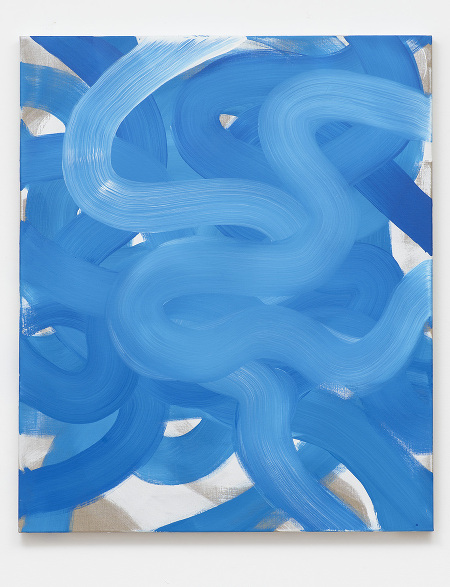 The works of Daniel Heil are notably constituted through their process of creation. The most recent paintings of the Düsseldorfer artist focus on substantial factors that form the basis of an integrated ontological system. A disposition to Zen Buddhism  to contemplation and meditation  prompt Daniel Heil to the reduction of his formal aesthetic that the title also refers to: the wheel of dharma, the tenet of morality and ethics, establishes the way to nirvana. However, in Daniel Heils view, a holistic approach, which is essential for his works as well as for a functioning society, is noticeably neglected in the present-day, post-industrial age. The centerpiece of the exhibition in the Galerie Voss is a blue series, which takes up this holistic idea in a vital aesthetic. Their painterly structures are based on close-ups of water, fire, and algae, which the artist produced after intensive observations of the natural substances. In the enlarged photos of the partially opposed elements, Heil found similarly winding lines. This natural ornament is translated onto the canvas with his characteristic brushwork. The flow is controlled through the hand of the artist, but also navigates over the elaborately primed canvas due to chance and structural conditions. The flowing of the wavelike brushstrokes appears so dynamic that one can picture the defined and at the same time meditative manner of the artist while executing them. Therefore, rhythm  recently, Daniel Heil prefers listening to classical music from various eras while working  and time play an important role. Through the application of spray paint on some works, the coating of color becomes - in contrast to the rather pastose acrylic - diffusive and layers appear more permeable. Fundamentally, with Daniel Heil the physical application of color belongs to the work in equal measure as the finished end product. One also finds this dynamic again in his earlier works, and it was described in more detail in essays by David Galloway and Thomas Wolfgang Kuhn (2018). However, the new series is not centered, but rather created to project beyond the edge of the picture. Like the endless fugues of a choral, the lines of color swing out into the expanses of sacral halls. Their continuation can be imaginatively anticipated by viewers and wind into infinity. They are perceived as close-ups of a greater whole. The subject of dynamics, resulting from that gestural rhythm, repeats itself in Heils compositions out of graphite powder and charcoal on canvas. Yet unlike in the blue series, this theme does not manifest itself predominantly through the manually defined application of color, but rather also through the idiosyncrasy of chance. For graphite pigments and charcoal are positively thrown on a tabletop by the artist, and thereupon horizontally rubbed into the primed canvas with a wooden panel. As indicated before, an hours-long, multilayered application and stripping of the white primer coat on the canvas is part of the process. In this way, incongruences of the raw, natural materials disappear, and generate a planar level, on which, through a uniform distribution of pressure, the initially slightly crystalline glittering graphite powder can now be two-dimensionally distributed. When the support - affixed to the table, primed and thereupon levigated in physical movements - is ultimately once again clamped onto the stretcher frame by the artist, a matt background develops through the graphite, which is accentuated by the jet-black charcoal fragments. In this energetic process, Daniel Heils works gain their material depth from two planes that have a tense relationship with each other. They interact in dialogue with the previously discussed blue series: they could represent a symbol of the dichotomy between rationality and affect, or asceticism and hedonism as the case may be, which is, once again, of significance to Buddhist ethics. Although one might assume it due to the reduction and the Buddhist parallels, the gestural forms of the artist do not require specific previous knowledge of the abstract expressionism of the 1950s. It is tempting to draw comparisons to Western art historical forerunners; however they conceal the far older tradition of East Asian culture. For example, it would be more appropriate to establish a relationship with the Japanese rock garden, the kare-san-sui, the curves of which are evocative of Daniel Heils blue compositions. Therefore, art should not be received exclusively on the basis of its self-reference. For although Daniel Heil grapples with historical and contemporary positions and was informed by his studies at the Kunstakademie Düsseldorf [Academy of Fine Arts Düsseldorf] with Prof. Katharina Grosse, he prefers to draw his inspiration from nature. His Selbstgespräche [soliloquies] - as the title of the publication in the Kerber Verlag (2018) on his compositions has it - possess a life of their own. They are idiosyncratic, nevertheless substantive, and thus universally approachable in their formal aesthetic. Theresa Wirtz, Düsseldorf (Translated from the German by Alexandra Skwara)