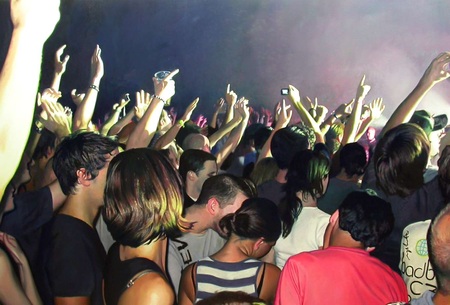 Opening: November 30, 2007 From November 30th on, Galerie Voss will show new works by Frank Bauer, master student under Gerhard Richter. Among the well-known photo-realistic works, the gallery will for the first time show a series of portraits from models that have been posing for the artist. Unlike the familiar paintings of his social circle - the so-called party and after-hour paintings for example - the exhibition will show on the first floor works that are based on self-made photographs the artist has taken from audiences of several pop concerts such as Daft Punk or The Stereophonics. The people depicted are not familiar with the artist. The pictures are typical snap-shots and no details have been skipped or retouched. The red eyes, the blurred parts of the photo, people's partial dump expressions have been exactly transferred onto the canvas. In addition, Frank Bauer has started to work on a series of portraits. The models that have been sitting for him are sometimes paid models, but you can recognise faces, as well. People that have been painted by artist from photographs before, have been posing for him, now. The difference between the two ways of painting is enormous. The recent portraits are incomparably livlier and warmer. They lack the static and time-bound character we are used from Bauer's other works.