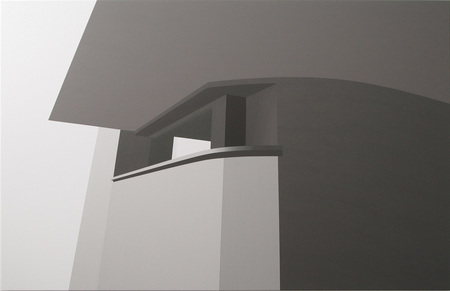 
1. On the problem of the picture cut-out and the possible relation with photography, see: Kirk Varnedoe, A Fine Disregard, What Makes Modern art Modern, New York 1990, especially chapters 1, Near and Far, and 5, Overview: the Flight of the Mind.
2. On the eyewitness principle and the representation of movement and space on a plane see:
E.H. Gombrich, Standards of Truth: The Arrested Image and the Moving Eye, in: The Image & the Eye, London 1999 (1982).

Walking around in a painting, I dont want to stumble anywhere.
When I put a colour on canvas, it has to sink to its specific depth.
If a big, say concrete, wall is part of an image, I want its shape to be such, that I can read it
as a motion instead of feeling its weight. Somehow I dont like a dominating base.
I like working with a soft lightsource and an equally soft darksource.