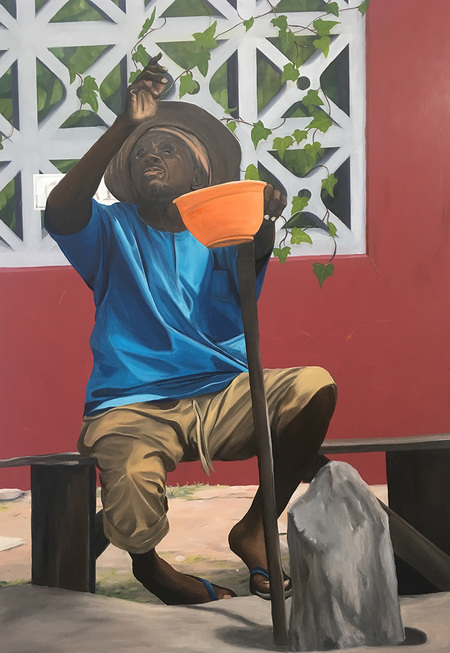 The Presence of Memory The factors that determine the development of our personalities and identities are multifaceted and complex. Memories of the past figure prominently here. Peter Ukas paintings illustrate such memories of events, people, colours and shapes - the formative moments of ones own life. They connect two continents and countries that, in their own way, are both home for the artist. Born in 1975 in Nigerias Benue state, which is named after the eponymous river - the "Mother of Waters" -, his oil paintings have been created in the lowlands of "Father Rhine" by whose banks the artist has lived since 2007. The connecting links here were the Yaba College of Technology in the metropolis of Lagos and the Kunstakademie (Art Academy) in Düsseldorf where he studied under the professors Tal R and Eberhard Havekost, in whose class he completed his studies in 2017 as a Meisterschüler (master student). Seemingly insignificant moments of reminiscence of everyday life find themselves set centre stage in his paintings, frequently fragmentarily but, at the same time, on a large scale. They are related to Dutch genre paintings or the Japanese pictorial art form of Ukiyo-e and, in this sense, pictures of the floating world. It is symbolised by forward movement motifs whether these be the small buses called danfo in Lagos, or the dangerously overloaded motorbikes that transport people and cargo in this city of millions of inhabitants. There, too, at the heart of the city is Makoko, a neighbourhood built on stilts along the Lagos Lagoon. Reminiscent of Venice, houses as well as people struggling to generate a meagre livelihood are picturesquely reflected in the dark and muddy waters. While the above-mentioned Dutch and Japanese images celebrate the livelihoods of the bourgeoisie, Peter Uka summons up the places and people that have been forgotten in the wake of modernisation. A beggar by the roadside remains invisible for most passers-by. His luminous bowl for coins and notes is large enough so that even benevolent individuals do not have to get too close to him when they throw in their donations. The painter likewise conjures up the departed ancestors who are no less invisible. They materialise during a festive dance, or appear in the kitchen of a friend whose father has recently passed away. The artist himself vanishes in a gesture of humility and respect; he bows before his audience and is well aware that it is this audience that makes him and his work visible in the first place. His style of painting is realistic and, as well, carefully composed. Peter Uka combines specific photographic models with remembered perceptions into a visually seamless arrangement in the tradition of the pasticcio. His palette of colours has been appointed in accordance with the tones and nuances of his Nigerian homeland, which convey the cultural specifics beyond the subject. In his current studio, in Cologne, the artist recollects impressions that stretch back to his childhood and adolescence, encompass his student days in Lagos and go right up to the recent visits to his country of origin. In a globalised world these are no longer places of exotic strangers and times but, instead, in this type of painting they have a presence that connects us contemporaries with the works of Jan Vermeer, Jean Siméon Chardin or Gustave Courbet. Moreover, unaffected by the reality of the global village, as defined by Marshall McLuhan, this presence endows our invariably unique lives with identity and, in the best-case scenario, the ability to recognise it in strangers. Thomas Wolfgang Kuhn, Tiergarten 2018