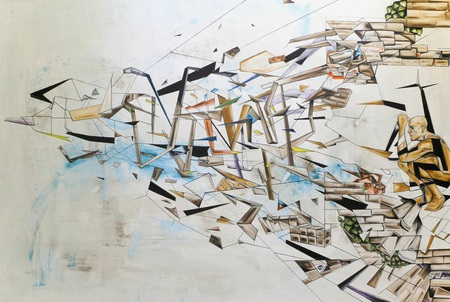 Galerie Voss is pleased to announce the second solo exhibition of Austrian painter Christian Bazant-Hegemark. Since his first exhibition in May 2013, his paintings now feature more open visualities, mixing the gestural with moments of highly talented craftsmanship. The previous works contemplative, introspective silence often focused one compositional highlight in straight-forward modes of central perspective, creating figurative narratives within abstract surfaces.
In his current work, Bazant-Hegemark extends this approach: the painting's narrativity no longer purely relies on the compositions strength. Instead, the canvas opens up to a plethora of visual forms and languages, resulting in a variety of isms complementing each other: the previous polarity of figuration and abstraction seems a thing of the past.

No longer following one straightforward compositional vector makes the paintings feel fuller, but also more demanding. They manifest a variety of thoughts, owing to Bazant-Hegemark having adapted a different, maybe more confident painting practice. Ultimately, the resulting works show him to be an artist dissecting his medium. Continuously examining his visual choices make him one of those artists focusing the multilayered question of how to create contemporary paintings based on the reflection of figurations history.

The newer works incorporate a visual layering that at times doesnt seem to stop at all, offering details within details - the large-scale painting Symphony, for example, features a sort of fractal approach, showing a variety of exploratory experiences depending on the viewer's distance, resulting in a Vexierbild-like effect. Its these flirtatious, volatile approaches towards forms that make Bazant-Hegemark's younger work feel more inclusive, expanding the previous oeuvre's narrativity: rather than telling a story, the newer pieces offer a variety of narrative fragments, emerging the viewer by offering forms without clear, decisive hierarchies - speculative stages of potential contexts.

The exhibition's title, 'Calibrating Aesthetics', references a work of Petra Franklin (US), and reflects the artist's approach towards the painting processes' experimental nature: the urge to manifest, examine and question an ever changing aesthetic vocabulary.