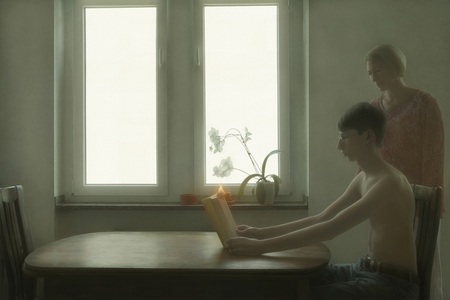 For the first time, Galerie Voss will show paintings by Masaharu Sato. In the asian region, the japanese artist's work has already been exhibited and repeatedly awarded, for instance with the special award of the renowned Japanese "Taro Okamoto Award for contemporary art". Having studied oil painting in Japan, the artist soon turns towards digital techniques. Based on photographs, he draws the motifs with a so-called digital pen by tracing the images. Afterwards, the original photo data is erased. The artist's highly developped technique and the fact that the digital painting does indeed not show any brush strokes or other traditional painterly characteristics, makes it impossible to distinguish exactly between photography and painting, whereas the blurred line between the painterly and the photographic is throughly intended. Masaharu Sato's images depict situations from everyday life, although the well known scenes are often disturbed by small, irritating details. A young adolescent is reading a book and flames are licking at the pages, a naked couple is sitting on the sofa in the lobby of a grand hotel, a wig creeps out a plastic bag that is lying on the street. The often surreal details are disquieting, and they may indicate, that we do not participate in everyday's life, but rather in a dream. In his series "Avatar", Sato has added an animation to his drawings. Portraits of his friends, each and one in different surroundings, are shown on eleven screens. Synchronically, they are looking at first to the side, slowly turn towards the viewer and then turn their head away again; these sequences are being constantly repeated. The title "Avatar" refers mainly to the Hindu mythology, which calls incarnated gods avatars. Masaharu Sato finds such incarnations in everybody, regardless what origin, looks or mind. He chooses the different scenarios in a way, that the bodies of the depicted people are always hidden by any kind of requisites. Reduced to the head bearing neutral mimics, the viewer is dependent on the surrounding to reveal the people's characters. The Exhibition will be opened on September 4 to 6, during the Düsseldorf Cologne Open 2009, the first-ever shared season opening for galleries from both cities. Close to 80 galleries will participate in this project, which after this year will be held annually after the summer break.