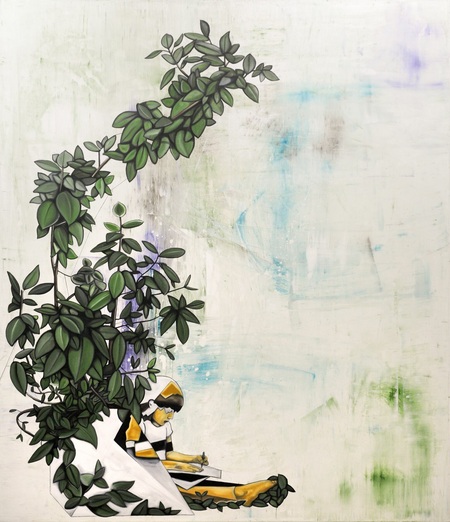 Transitions to the Interior Lying back, eyes closed - somebody in familiar surroundings. Perhaps we then think: Are you asleep already or are you still awake? and utter this question now and again. An answer is not always forthcoming, even when the mind beneath the lids of the other person is still active. The internal state is allowed to remain a secret even where there is trust. If sleep had closed the eyes would there then still be images in the mind? Are these the images that become visible to the dreamer in a half-hidden way and then, in most cases, disappear, frequently becoming blurred and remaining in fragments? And if sleep has not yet come, does a visible motif from a different world of perceptions then appear in the mind? The transitions are fluid, sometimes abrupt, between the states of nothing into something and from the world of dreams into reality. In both worlds, shoots sprout up that nourish themselves, in both realms, via roots that are delicate and sturdy as well as flat and deep. These are not completely separate realms but have become entangled and fused with each other at the base and on the summits and linked in zones out of sight. Closing the eyes - can that perhaps neutralise gravity, reverse above and below or, for long moments, do they cease to exist at all? A pole disappears from a familiar geography and shifts itself to a warm-blooded self that, over the course of a lifetime, undergoes an organic transformation and emerges as a figure and a contour from the material base. A compass is spinning ... Perhaps it is not the visible that seems to have been displaced from its usual axes. Is the position for viewing things always with both feet on the ground? Defined or unbounded by reality? The new paintings and drawings by Christian Bazant-Hegemark revolve around conditions that are not easy to grasp but that could be familiar to all people and pose small new riddles for us every day. People extended half organically and botanically and half architecturally with the structure of crystals, seemingly upside down in the world, hanging/floating/recumbent - they themselves appear a little enigmatic, almost magical. The images indicate a threshold for the viewers own perception and own thinking - a place of transition. Beyond the psychological questions about internal and external images, - and the aspects of perception and their interpretation between the collective, archetypal code and individual character traits - culture, community and civilisation are constantly in transitions. Above the horizon of perception, only the periods of paradigm shifts are actually visible where, - from the perspective of an ever new today and from the point of view of the supposed sentinels in a previous yesterday-, all that can still be seen are merely sleepers. We are currently experiencing such a time of transition with the digital advances into the analogue world. This is entirely the same path that ushered in the scientific into the religious world and, in turn, the psychological into the materialistic. Inevitably, the arts cannot remain immune to these developments either. Using the formerly analogue medium of painting and drawing, Christian Bazant-Hegemark has explored the possibilities of incorporating these technologies in relation to image composition and image production. This process is however not only a means to an end for the realisation of new, unknown forms. The production process - beyond the artistic design of the finished painting - is itself one aspect of the subject. If we were to compare this process with biology, we could say that Bazant-Hegemark is carrying out work on the genetic code of the paintings. Fittingly, the double helix appears as a motif in several places in his paintings. It stands as a symbol for the fusion of renewal and remembrance, moreover, based on experience, it is not devoid of the associated ambivalence and yet it harbours both opportunities as well as risks. Against this background, if we once again examine the pressing subject in the paintings, it evokes diametrically opposed experiences - such as healing dreams and nightmares - that, when applied to political visions, can be so close together that they can no longer be distinguished from each other. Yet, in his paintings, the hybrid combination of the digital and the analogue is also a kind of utopia that has materialised. Here, the paintings provide a metaphor for what is happening to people biologically in our present day. Not only are they getting mechanical spare parts for defective joints but, in fact, being equipped with technology that extends the senses of a completely healthy body. Fear or hope and, in some cases, a mix of both accompany us in the transition from the old world into the new. Yet, we are only seemingly standing on the threshold. A long time ago, we stepped through the door into a corridor whose end is as indistinct as the unexpected turns in a dream. Or is the corridor simply sucking us in? Christian Bazant-Hegemarks art is a plea for active engagement that also makes the laissez faire apparent. Perhaps the fusion of the digital and the analogue is a hybrid, just like the combination of external reality and inner vision, although here it appears to be fruitful and fearless. Thomas Wolfgang Kuhn, Tiergarten May 2019