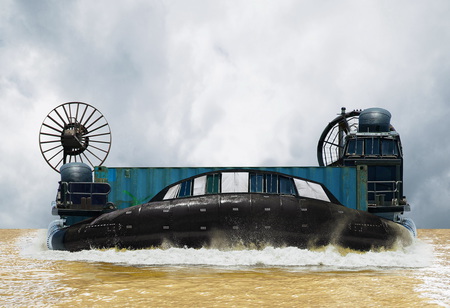 Fleeting Transmission Sandra Senn (b. 1973) composes models of pictorial worlds and in this way creates interfaces between fiction and reality. The pictures are assembled in painterly fashion from various elements that the artist herself photographs and playfully, with subcutaneous subversion, incorporates into an imaginary landscape. The subtle arrangements  the fleeting transmissions that spark associations, awakening memories and feelings  are also shaped by contemporary events. Banal building sites riding on waves? Archaic arches fallen out of time? What Sandra Senn turns into narrative so playfully but with such subcutaneous subversity sparks meandering associations, transposing feeling into multiple currents of memory. Profane building materials, chipboard panels, lumber  both banal and unmistakably cheap  lean with the silhouette of house-like, voluminous ships in a polyphonic chorale that resists specific recognition but offers ample material for theatrical dreams, sleepwalking theater. As though it were a matter of keeping distance from inquiring glances, the blinded ships of Sandra Senn apparently drift about without expression, unresponsive and mute, yet if one listens more closely, murmur faintly with many different voices in the endless ocean of intangible yearning, without explicitly postulating whose piece is now being played, whose fate at sea has made its way to the stage. On distant seas, far removed from civilization, followed if at all by a final pair of seagulls, these exiles that, had one asked, never wished to be exiled, drive on with each other and with the waves toward an indefinite future. How would it be if their facelessness possessed an inner countenance? Text: Markus Stegmann Translation: David Galloway