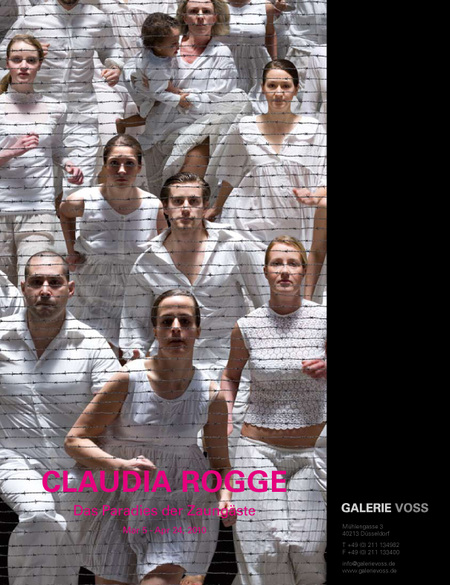 Videoinstallation  One/Moreby Claudia Rogge and Peter Riese. Performance by Claudia Rogge and Sebastian Neuhaus. The upcoming exhibition "Das Paradies der Zaungäste" by Claudia Rogge will show the artist's latest series "ISO" and "The Paradise of the Onlookers". Both series consistently link with her former work groups "Rapport", "UNIFORM", "Dividium" and "Chorelation". Those series, developed between 2005 and 2009, have been exhibited in a large retrospective at the Moscow Museum of Modern Art in May 2009. Intense examinations of the topics "individual" and "mass" form the base of all series. While "Rapport" focused on the formal and visual aspects of masses, the later series consider the topic from a rather contextual point of view. All depicted people inherit a role. They turn towards each other and interact, but at the same time, they seem to be imprisoned and isolated from the outside world. The question is, whether or not they show their inner self or just act within a role. "The Paradise of the Onlookers" outlines the acceleration of society, and its want for satisfaction. But this satisfaction proves volatile, and a new aim has to be set. Like Sisyphus, the aim, once achieved, is directly replaced by a new one. The "ISO" series analyses the ways people judge and label other people. Rogge has set up those categories and found a way of actually labelling the different people by literally stamping them and letting the depicted people stamping themselves. In addition to the photo works there will be a video installation called "One/More" that deals again with the topics "individual, group and mass". While Claudia Rogge's photographs show the final composition of the masses, the video installation begins with the presentation of the single protagonists which start to form a group throughout the different stations of the installation. At the opening reception, the artist will stage a performance, as well. A uniformed group of people will march lock-step in front of the gallery, uproarously accompanied by various pieces of text and music. Similar to the photographs, the artist arranges the different people by means of music, costume and choreography.