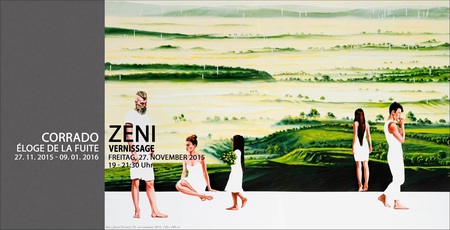 In times like these, escape is the only way to stay alive and keep dreaming. Henri Laborit In my last series of paintings the change from the technical, formal and conceptual point of view, is strong and important. I had revolutionized all the schemes of my work reversing my point of view. For nearly twenty years I chased people I casually met here and there, I photographed them, extracted them from their stories and assembled them in my own, personal and detached story. The technique and the creative process are now free from the almost scientific scheme of the previous research, sketches and precise photographic montages are no longer necessary, its a more spontaneous way of painting, less controlled, rich with symbols and almost dreamlike. The conceptual side of the new works starts from Henri Laborits considerations in his famous book éloge de la fuite (Praise of escape). Escape as a resource and not a surrender, escape that allows us not only to save oneself when facing events that are out of control, but to find new paths previously unthinkable, with new perspectives that were and new havens: ... to pursue a constantly changing goal that it is never reached, is perhaps the only remedy to routine, to indifference, to satiety. It is typical of human condition and it is in praise of escape, not to retreat but to go forward. Metaphorically the characters in the new painting are looking for their escape from the canvas, from a context that cannot include them anymore, no longer sufficient to give them the breath they need. It takes seven seconds to build a prejudice based on someones appearance. This is why I chose to dress everybody in white, I didnt want to put any accent on social class or religion or origins. Everybody deserves an escape. As artist I do want to be honest, I try not to be afraid to surprise, to change, to revolutionize my own language and work while sticking firmly to the core of my reflection about people. This is probably my way to escape. Corrado Zeni