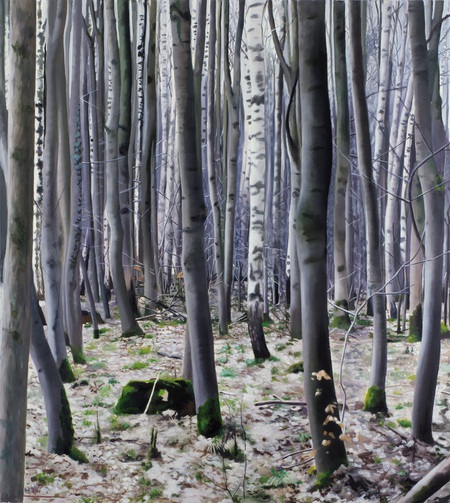 Opening: Friday, November 4, 2011 at 7 p.m. In the cycle of paintings entitled "the wood for the trees" the artist Frank Bauer expands his stylistic means in the field of abstraction. It was Per Kirkeby's exhibition in the Museum Kunstpalast that basically served as a source of inspiration. Bauer used Kirkeby's approach to a step by step detachment from the object. But he didn't follow Kirkeby all the way to the entire dissolution of the object. Some of Bauer's paintings are consciously based on "abstract" photographs. The artist also enlarged certain parts of the original photograph so that they eventually lost touch with the major context of the picture and as a result could rather be seen as a composition than a realistic image of something. Just like in his former still lifes, the artist strives to overcome chaos, apparent disorder and coincidence in a visual way. A painting by Otto Dix, shown in the Museum Von der Heydt in Wuppertal, was an important influence: "Dix painted a wood, which evoked the feeling of insecurity, decay and hostility through its alienated colors and shapes. A motif, that consistently seemed to exist as a part of a romantic idealization in Germany, was changed to the opposite. This fact made me try out different emotional contents in the wood-paintings, ranging between contemplative silence, doubtful insecurity and uncontrollable outbursts." Nature is the artist's great object of interest as it represents strangeness, which can be both: a source of fear and a source of longing - just like the woods in fairytales and reality. The ongoing and expanding growth of the wood and its aimlessness are fascinating, consoling but also terrifying at the same time, depending on the evoked associations. It was Bauer's effort to keep the many options of associations open, without pointing the observer too much in a certain direction.