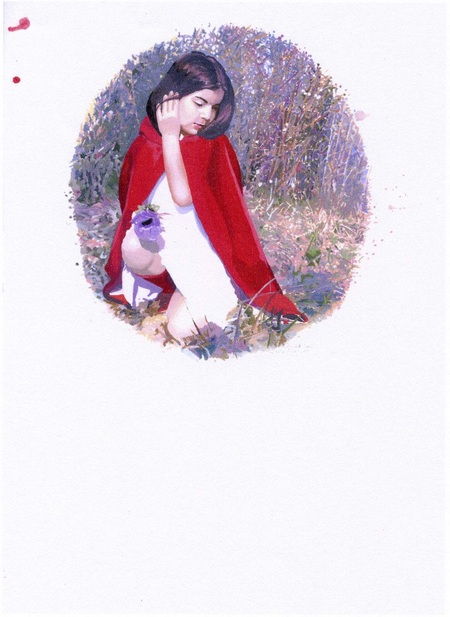 The exhibition  The Flesh of Fairy Tales shows both the painted and the installative work of Katia Bourdarel.
Her works reveal human passion, greed, aggression and sexual desire. However, they are like poetry: they suggest rather than assert.
Flesh is Bourdarel's main actor. It is not just a covering, but it is tactile skin. It becomes a frontier and defines the limits: Outside: it is us. Inside: it might be the other. It is the contact between interior and exterior, between the "I" and the "not I". A naïve link to childhood anchored in each one of us. Katia Bourdarel's art pieces are indispensable tools to cross from one state to another. It is their aim to destroy all first impressions and to reveal the truth that lies behind.
The artist wants to reveal the distance, this void between the image and reality, the almost invisible tension by relatively simple processes: a sound, a colour, a word that literally aggresses the first impression, the assumed I. Damaging the surface allows a deep separation, to oppose so better to reveal. But damage means also the feeling of loss and perdition. Katia Bourdarels models, her motifs, the ambivalent situations, the misleading appearances set up an ill-feeling that isn't always recognisable, halfway between desire and repulsion: The little girl's glance implies a certain dreariness, which strongly interferes with the initially gracile and harmonic impression of the watercolour. The idyllic get-together of the deer and her fawn, as shown in the installation Bambi Forever, is suddenly interrupted by the haunter's gunshot; terms like hopeless or no dream are engraved into the emerised deer-sculptures that complete the installation.