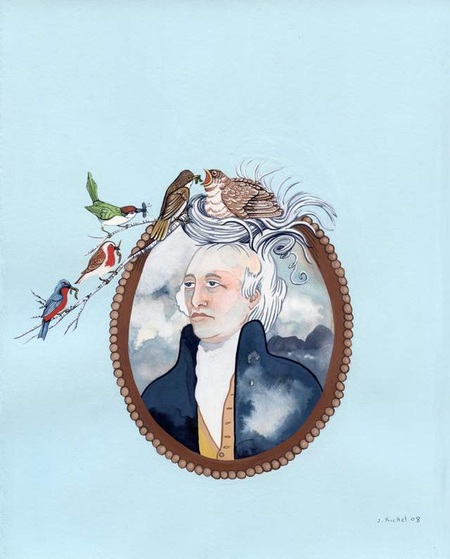 The solo exhibition will show works from the "Big Wigs" and "Sweets" series. The overarching theme of Richels work is concerned with early American history, but much like their predecessors, these are history paintings infused with a highly contemporary message. Their details emerge to illustrate not only an alternative vision of the founding of a country, but to provide a biting commentary on the state of the nation today. Richels Big Wigs series forgoes the portrayal of known figures, but makes extensive use of the stylistic qualities of historical portraiture. Although we dont recognise these men individually, their significance is easily communicated to us through the formal choices of the painter: the crisp uniform, the self-important posture, the carved wood or sculpted gold frame. And of course, the wigs. Though the practice survives only in the form of a terma person in a position of power is sometimes called a big wigwigs were once an expression of social and political status in America. This indicator of power is mocked, and thus deconstructed, in these satirical paintings. We see these men and their wigs invaded by birds or bird droppings, sculpted in the form of an owl, entwined with flowers that seem to grow directly out of them, or dangerously enflamed. Whatever malady threatens their wigs, these gentlemen never break pose, their serious faces focused only on creating an image of their own importance, completely unconcerned with the potential dangers swirling around their heads. Though the portraits seem primarily to poke fun at the figuresheightened by the slightly cartoon-ish style in which they are paintedthey also force us to question the reverence with which we portray important people, often at the expense of considering the real person behind the projected image. And although we view these with humour, there is a degree of menace in the thought that these men wilfully ignore all that is happening around them, concerned only with the construction of their own image and perhaps, their place in history. At first glance the Sweets paintings seem to be a wholly independent series, unrelated to the historical and political commentary of Richels other works. A tornado with swirling doughnuts, a tsunami of gumdrops and frosting, a globe of assorted pastries, cornices and chandeliers constructed of perfectly formed candies, every kind of cake and cookie clamouring over each other to make it to the top of an enormous pile that dwarfs the little picnic table underneath: these are joyful works, childish in their exuberance and in love of all things yummy. But as we begin to give in to our temptations, contemplating where to dive in to the amazing choice of bright colours and gooey goodness on offer, somehow the adult creeps in. The realisation of the massive stomach-ache that would follow such a feast incites caution. The child-self that seeks immediate gratification to satisfy its craving battles with the adult-self, who knows that sometimes too much of a good thing is not a good thing at all. That indulging our every temporary craving is not always representative of our best interests in the long term. The term conspicuous consumption comes to mind, and we are brought forcefully out of our confectionary child-dream, back to the hard reality of a society where success is measured largely by ones relative ability to consume. In the artists words A flawed yet functional infrastructure. A conglomerate society of multi-coloured temptations, vying for the same hierarchical position at the top of the heap. The images are suddenly viewed as just as political, and just as much an illustration of American history past and present, as the Big Wigs. The success of Justin Richels work is that it comes as a complete package, and yet in no way does he present his subjects as closed. His images are captivating from a purely aesthetic viewpoint, but also contain much to ponder in terms of content. Each piece stands strongly on its own, but forms part of a rich dialogue, constructed in a visual language that gives a firm nod to its art historical predecessors, but remains the artists unique creation. Perhaps most importantly, whilst some very specific ideas can be culled from this language, Richel is careful to leave a generous depth of space for the viewer to explore and develop their own interpretations of the work, resulting in paintings that can be viewed again and again, always offering some fresh new insight. The ability to successfully tackle politically charged subject matter requires a certain balance on the part of the artist: the work must be accessible to the viewer, yet retain its complexity; it must communicate its message, but allow space for multiple viewpoints. To tread too softly with the work risks that the message will not be easily heard. To push too hard risks that it becomes didactic, dictating rather than encouraging dialogue. Richel gracefully manages this particular balancing act, and with rare consistency in an artist so prolific. Catalogue available.