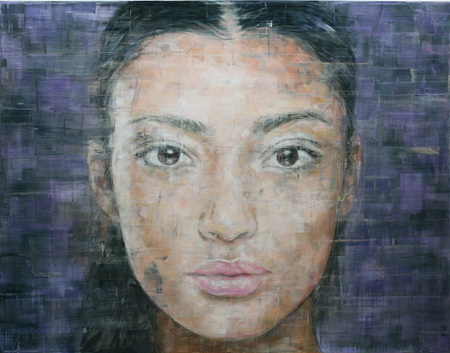 - e x t e n d e d until August 23, 2014 - Faces, nothing but faces in virtual shape directly before our eyes. Each is on its own, none is like any of the others. Having been built up of several colour layers over weeks they seem, at one time, as if created after real patterns. At another time, the top layer is treated with a palette knife or a squeegee and roughened, which results in relocations, smudges, unclearness. In this way, a barrier of respect, which cannot be got over easily, pushes itself between spectator and picture. What was placed with a lot of energy as it appears on the canvas gains in abstract speed. The distance thus formulated slows down the speed of seeing. The painting, which works like a filter of the mind, too, powerfully turns against the superficial assumption that the picture is just a reflection of some outer or inner image. Thus, in addition to painting with its wise difference from stupid photography, craftsmanship with its special manner of measuring time is made a subject, too. The loss of perfect smoothness not only deletes the directness that would have guaranteed accessibility through closeness but also creates an unusual emotiveness of depth which, originating from a distant look, conjures up something mysteriously inexplicable.(..................) The confusing thing is that Meyer, as a rule, does not fall back on models from among his friends but borrows the faces from the mass media, which dominate everything and leave their mark on public taste and opinion. His motive, though, is not a need for blind duplication. He rather starts a lengthy search for a certain moment which would be more narrative than another. One might speak of an intensification by means of colour layers. But this would not suffice either. All in all, there is a transfer connected with the question what effect the faces have after being removed from the media. What is left of them? Is there anything that might last beyond the moment of their short appearance in the media? Something unspoken that is apt to keep the eye-machine going? Something you cannot evade because you cannot simply drop it or make it disappear? By using painting as a medium for his difficult translation job Meyer, of course, proves its power and specific quality towards other media. The loss, which is unavoidable whenever a photograph is transferred to canvas, is compensated by a gain in haptic sensuality. The interesting thing about the faces is that Meyer does not leave it at a short series but trusts in an endless series reminding one of a film; thus he makes clear that there is an obsession, a compulsive repetition and also the desire to gather some imaginary community around him. One in which he may find something like a home. A home that would neither have a place nor a chance outside painting. Actually, a face is likely to appear quite different once it is put in an ensemble with a kind of movement arising.(..............) Except from a text by Heinz Norbert Jocks