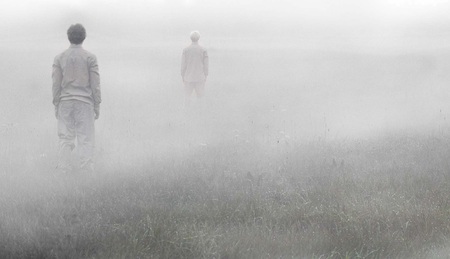 "Way Ahead" is the title of the new photograph series by Maria Friberg. The central theme is man's attitude towards his future. Even though one cannot look into the future or even be there, eyerybody seems to have at least an idea and a vague picture in his mind of what the future will bring and might be like. The series was inspired by paintings of historic battles such as the Battle of Lützen, where you see men rising up in the fog trying to figure out what has happened and to locate themselves. Just like these paintings, Maria Friberg's photographs are created in extremely wide horizontal formats and being long and narrow, these pictures give a sense of time and concurrently also refer to the oblong screens of feature films. Moreover, the cutout feigns the view from an observation slit, maybe of a bunker. The men in the picture are standing and sitting like figures in an architecture model. Being torn away from the viewer, they seem unreachable and intagible, but their posture is directed and determined. Their bodies help create perspective and direction in the diffuse landscape. It is these very directions - the inner direction towards themselves and the outer determined focus towards the unknown - that form the core of the work. A still movement. The battlefield has become an allegory for uncertainty but at the same time optimism and joyous expectation of the future. Opening: Friday, April 24, 2009 at 7 p.m.