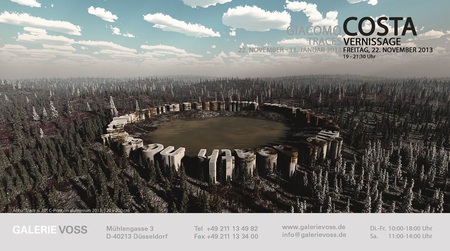 The Florence based artist Giacomo Costa accomplished to present landscapes in an unreal almost surreal manner. His motifs differ from large city panoramas to nebulous sea scenarios. All of his works do have one thing in common: they convey the feeling to get lost due to the richness of details and the sublimeness of his art. The artist focuses on postmodern landscapes which are coined by decay and caducity. Therefore his art claims to reflect upon his emotions about the city. After moving from the mountains of Italy to Milan he was inspired to produce art connected to the concept of the larger towns. These impressions were recognized also by architects, such as Norman Foster, partly caused by elements of constructivism which can be found in his artworks. Another important aspect connected to Giacomo Costas artworks is the constant demand on the audience to reflect about human behavior. His paintings taken from the Scena and Veduta series dealt with the approach that mankind need to avoid ruthless behavior cause otherwise the planet earth will change dramatically. This symbiosis of beauty and decay is also expressed in another series called Secret Garden which did altercate with the territorial recapturing by nature. His current exhibition called Traces includes former concepts and combines architectural and artistic aspects. At first view the artworks depict sea and cityscapes. On closer inspection the audience is able to recognize that the building structures do represent letters and whole sentences. These famous quotes must be analyzed as the last traces of humanity. With regards to the content Giacomo Costas series argues with the question what is left after the discount of humanity and must be analyzed as another intellectual approach in order to reflect upon human behavior. Particular focused on how this behavior shapes the intellectual legacy. The composition of the artworks is defined by a clear horizontal line which separates the works in two parts. This dualism is shaped by the contrast of light and darkness, reality and chaos and creates the characteristic largeness of his art. The interaction of aesthetics, decay and intellectual demand defines Costa's art without necessarily frighten or intimidating the audience.