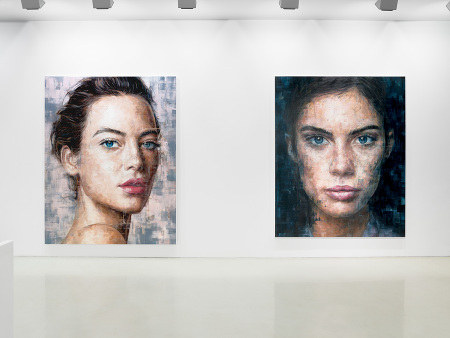 Harding Meyers portraits dealing with extreme close-ups not unlike those with which filmmakers signal a characters emotions. Indeed, the Golden Age of Hollywood saw the development of a special eyelight to lend dramatic emphasis to such revelations by putting a sparkle in an actors or actresss eye and frequently offering clues to his or her intentions. The painted portrait had long since employed such highlights to lend vividness to the sitters gaze, and the works of Harding Meyer are no exception. With such classic techniques he lends his figures a compelling individuation that belies their anonymous origins, integrating them into the family of man through the sheer, transmogrifying force of his art. (from: Pentimenti Redux by David Galloway, 2016)