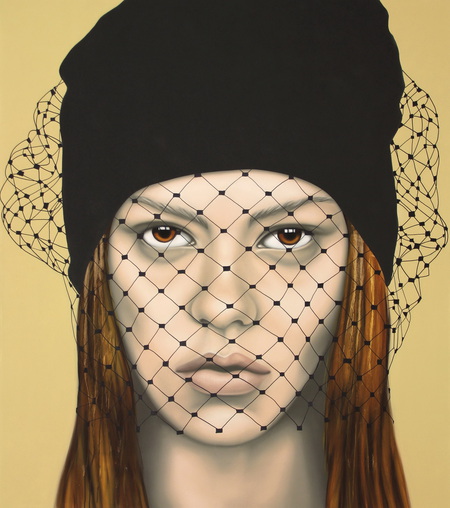 Sandra Ackermanns characters call for a dialogue with the viewer and confront him with a story underlying her pictures. In this connection the women act as a kind of layer for a deeper narration, for which creation Ackermann often consults livestyle and fashion magazines: On the one hand the characters retrace the deeply seated ideal of human beings in Western advertisement culture and thus consequently stay in a long tradition of conventional embodiments, beginning with Egyptian sculptures over frescoes of the ancient world to the point of the Ideal Woman in modern times. But this facet always seems to be only superficial and opens a much deeper discourse: Unsettling, or at least as deplaced appearing illustrational elements attest that every character comprises a tale [in it] that often needs an interpretation  and therefore left to the reception of the viewer. The female figures appear in their mostly central positions as foils or projectional interlayers for complex corporate phenomena, actual difficulties of political or environmental kind and as an initiator of the issue of a gap between icon, image, the existent, and  as a last consequence  the truth. Through the distinct language of shapes Ackermann not only programmatically visualizes the semiotic triangle of the reciprocal provisory of the topoi of term, symbol and object, but furthermore invites the viewer to participate in a dialogue  and asks for a displacement of the feigned reality, whose only benchmark again is the motif of the displayed woman, whose stoical gaze the receiver cannot escape. On the other hand Ackermanns female figures find themselves in an environment of corporative lapse, which apparently is beyond their control. Therefore they remain in these not God-given, but socially preformed surroundings, and, in relation to that, they have to refer to their own positions. Thus the female figures do not manifest themselves as victims of a dystopia but rather as emancipated individuals who merely permit the question of whether we deal with reality or rather with surreality. The artist builds a bridge through the inter-relation of the figures with the constellation of their environments. Sandra Ackermanns pictorial elements are composed in a controlled way and often reveal critical components or even unsettling ones, despite their clear and frequently poetic imagery in which the shown figures always hold a cryptical truth. The former Slade School of Fine Art scholarship holder describes her oil paintings as mirrors  as beautiful as advertisements, yet truer in emotion, [...] only existing to give the feeling I have of the world in which I live, an illustrated expression. This statement also shows that Ackermann´s motif stylisations serve as a hyperbole of real contexts, which, through pointed use, open up the gate to complex discourses and to the characters diverse inner lives. Béla B. Jász-Freit, Düsseldorf