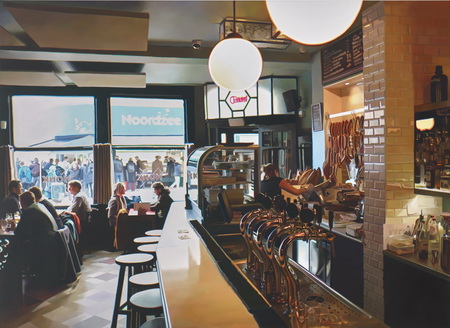 The exhibition by Kate Waters will be extended until November 11, 2017.

Images of our times will be on view at the latest Kate Waters exhibition. They are pictures of places that could nearly all be rooted in our collective memory - a Brussels restaurant by day, a New York rooftop terrace in the evening and a pedestrian crossing in central London at night. Incidental scenes in modern urban spaces whose picture-worthiness has been explored from ever new angles since the Impressionists. Cropped fragmentary views of people and architecture that appear to have a presence and, at the same time, to metamorphose into landscapes of colour, light and form. A combination of tranquillity and serenity lies over the scenes, even in the hustle and bustle of the road traffic, or the lively nightclub at the feet of the showgirls. A cross between a world of leisure and touristy-looking snapshots from Venice. As if seen from the viewpoint of an innocent eye looking at a world that presents itself as non-threatening and peaceful. The Impressionists may already have succumbed to an illusion by wanting to see the new world of the western metropolis in a completely novel way. Paris - the city of illuminated streets, cafés and world fairs - the capital of the 19th century. Buoyed by the strains of Jacques Offenbachs music, perhaps this also paved the way for this new concert hall, which opened in 1865 - Ba-ta-clan. In times of terror - which can strike any and every place along with any passer-by who just happens to be there - all incidental scenes are subliminally charged. The names of cities such as Brussels, New York and London now sound - at lower and more piercing frequencies - like something other than the catchwords for a thrilling lifestyle. Deep-seated uncertainty papered over with shock-tested bravura in the shadow of intense fear has been emblematically captured by Kate Waters in a scene from the Royal Museums of Fine Arts in Brussels. A young man stands in front of a painting - The Death of Marat by Jacques-Louis David. With this painting, David created a memorial tribute to the French politician of the revolutionary period who was the victim of an assassination. This defenceless and guileless victim in a bath was fatally stabbed by an anti-Jacobin female activist. However, Marat was himself considered to be a precursor of the Reign of Terror that, two months after his death, claimed the lives of thousands of other people. This has now been turned into high art and, after more than 200 years, this horror would now be barely imaginable. Until one February day in 2017, when the Paris' Louvre was closed after an attempted attack, it became "Extremely loud and incredibly near. So, those who, in turbulent times, seek refuge in the sanctuary of art may well be surprised. And whats with those erotically dressed women in a nightclub? Are they representatives of an endangered permissive, liberal lifestyle in the secular west? Or do they not rather represent the tried-and-tested and successfully commercialised sexist exploitation of women in a culture that is still patriarchally oriented? Is gender itself not just a social construct? And who are the dark-skinned men at the Brussels Palace of Justice? Are they clarifying their own legal issues with respect to migration and refugees? Or are they following the tracks of the great financier of this magnificent monumental building - King Leopold II. The Congo Free State belonged to him; it was his private colony and the source of his tremendous wealth in the shadow of tremendous atrocities carried out against the inhabitants. That too lies in the distant past. Nevertheless, perhaps some parts of that history can explain current events in the southern Mediterranean. You dont have to follow these trains of thought, especially not as the pictorial quality of the images themselves has remained entirely committed to art. That in itself is already an approach that offers opportunities for discussion about the state of other contemporary art. Yet, beyond that, Kate Waters provides points of reference for a very topical and critical interpretation that opens up her images of our times for political and social questions, too. Quite incidentally, en passant. Thomas W. Kuhn, Tiergarten 2017