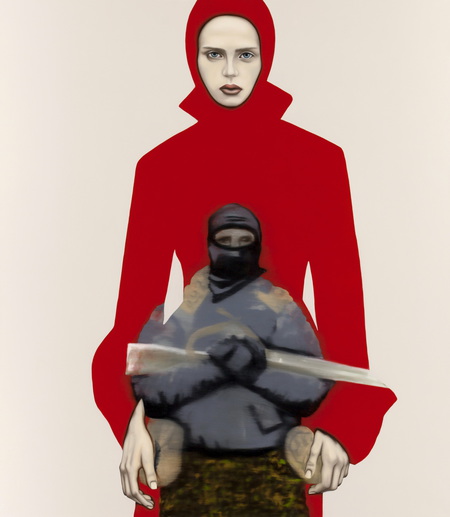 In todays consumer society the media stages and manipulates ideal depictions of the
human body and moulds the perception of the individual according to implied
standards. The result is an enormous pressure as regards the corporeality of our own
bodies.

Due to this aggressive publicity of the media, the female body in particular is subject
to a massive transformation. For not the exceptional or unique picture is propagated
but the currently normed beauty.

In art historic narration the depiction of a woman has an almost dogmatic tradition; namely female bodies as objects of gentleness and sexuality. The portrayed woman always corresponded to the social role as a passive onlooker or an object of desire.

Performance art has strongly altered contemporary understanding of the
womans role in art. The performance artists provoked the viewer with their own
bodies and literally stepped out of their art-historical connotation. Yet the
representation of the female body, by critical reference, remained an objectified
symbol.

In her work, Sandra Ackermann is aware of the contemporary beauty ideal of women. Her female figures diverge between naturalness and stylization. The individually lighted subjects merge the ambivalences of reality.

The visual language of Sandra Ackermanns work is often metaphorical. The portrayal is composed of the ideal female body and the construed
background and foreground. Both background and foreground function either as a scanner or screen of hidden thoughts and impressions or reflect current political and
cultural events. These works of the artist are a visual documentation of violence, terror and social injustice packaged in a beautiful projection surface of aesthetical
arrangement.

Sandra Ackermanns works are ultimately a contemplation and mirroring of the
phenomena of our mediatised society.

The fragmentary depiction of her work allows the eye of the viewer no instant
cognition of the figure. The eye hovers between background and foreground. Sandra
Ackermann creates a sort of occultation  this interplay allows the viewer no focus on
the personage in the painting.

The presented female figure appears deconstructed and fragmentary.
These fragments are the vacancies of a depicted body construct, in which the viewer, according to subjective perception, is invited to have a dialogue.