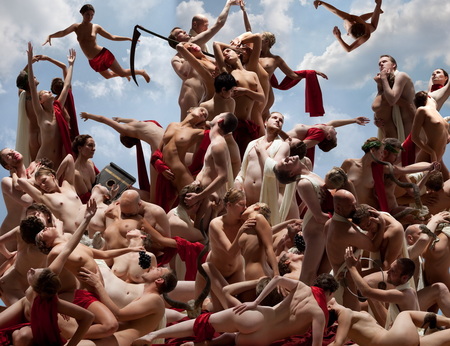 In her photographs that refer to Dante Alighieris La Divina Commedia Claudia Rogge (*1968 in Düsseldorf) unfolds a kind of imagistic theater whose aesthetic opulence astonishes viewers, while countless nude figures cast their spell over them. The large tableaux in her new cycle, EverAfter, recall the cohesive compositions of Christian paintings, such as the famous murals in the Sistine Chapel, yet they are assembled from a variety of disparate visual elements. The realistic effect of these digital collages exceeds that of painting and is immediate, sometimes disturbingly so. The configuration of a massimages of nude bodies, in this casehas long been an overarching subject of the artists work. Picking up on the central theme of mass and the exorbitant distance between heaven and hell, this publication presents Rogges latest work, which recovers a measure of beauty in the midst of horror.
ISBN: 978-3-7757-3303-8