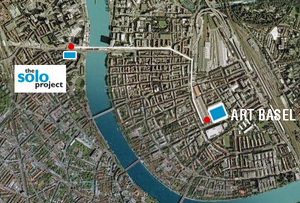 "The solo project" has been set up by Paul Kusseneers Gallery in Antwerp and is supported by an array of 21 established galleries in both Europe and America in order to address a number of qualities we consider to be missing from the international art agenda. Its aims are to present artwork from an invited group of international galleries, who in turn have selected artists from their own gallery programme to make a presentation in a clear and defined manner.

The show, due to take place to coincide with Art Basel in June 2008 will make a serious attempt to focus the art gallery going public on this carefully selected group of artists, each presenting solo or collaborative projects.

The presentation will take place in the centrally located Voltahalle on the first week of June.

The familiar environment of works being contextualised by dealers within a major art fair with the proliferation of an ever increasing number of subsidiary fairs is now common place. This project is not an attempt to replicate already existing art fairs but rather a chance to enhance the contemporary art experience presenting a more in depth view of each artists work.
It is the plan of The Solo Project to take a different approach, resembling more, a series of considered gallery type shows in well constructed spaces for each gallery, giving the works more 'room to breath', the artists more room to make a clear presentation and the visitors an environment in which the works can be considered as a body of work rather than as loan pieces. The galleries exhibiting will have works for sale but the emphasis of this event will be a return to a scholarly based agenda.

Within this context and in response to requests from an increasing number of collectors, The Solo Project will attempt to avoid basing its choices of participating artists and gallery's on age as a defining factor but rather base this choice initially on the personal invitation of Paul Kusseneers and his advisers. This may very well change in time but at present this seems the most realistic approach for the first year of this event.