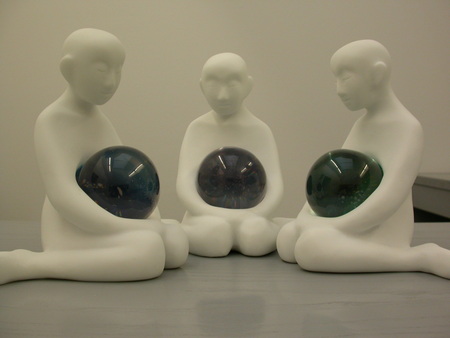 
The new series "Milky Ways" by Mihoko Ogaki is about life, and the living individual including its emotions like sadness, joy, delight or even jealousy, rather than the topics birth and death, that already have been analysed in the earlier series "before the beginning - after the end". The nine-piece drawing "Transition" describes the passage from the series completed in 2006 to the current work. Adopting the unformed, cellular shapes from the video installation "before the beginning - after the end": #2", the motif is slowly being transformed into a starry sky. The title of the work marks the transition from birth and death into life.

For Mihoko Ogaki herself, "Milky Ways" - being a symbol for life - is a very private matter, as it is the first time in her work that she uses the image of a human being - the image of her very self. In doing so she does not seem to be too interested in her own image, instead she tries to turn her inner self outwards in order to uncover her emotions. Her sculptures communicate this state by the use of light and light reflecting materials.

In "Milky Way: #007", the artist embeds her drawn picture in a universe of emotions. The lying body is framed by people's silhouettes, whose postures convey different feelings. Painted on two-hundred loose book pages, the drawing represents a completed story. The dotted black-and-white drawing blends the different figures and mingles them with the sky. In the drawings, the human figures are part of the universe, whereas in Mihoko Ogakis sculptures, body and universe seem to be one.

Being lit from within, the life-size sculpture "Milky Way" lets the light shine through thousands of little holes. The figure is glancing down at her body, and seems to watch the hustle and bustle. The whole scene reminds of the christian Lord of Creation, being God and his creation in one person. The small-sized sculptures have a similar effect. According to japanese belief that the soul is located in the abdominal region, the plastic ball in the lap of the little figure shows a drawing, that is painted on its belly. An iridescent, starry sky is being reflected by the bowl and seems to radiate from the sculpture. However, it is not clear if the figure holds the universe in its lap - like a little deity - or if it is the universe itself and the bowl is just the window on the world.