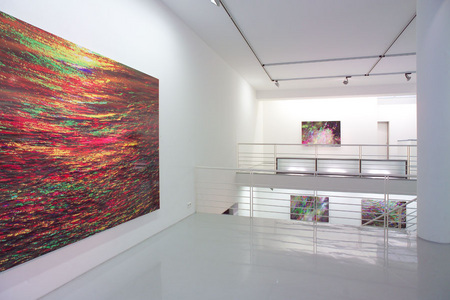 The tranqilising effect of water is something you can hear and sense - and now even see in the works of Kay Kaul. The artist has transformed the murmuring of the creeks and the reflections of floating drops into photographs, he has visualised the liveliness of water by means of multiple exposure. The photographs' flickering impression is not any virtually producible electronic effect: he takes six pictures every two seconds and mounts them together on the computer afterwards. Every time he presses the trigger, he uses a different colour screen: red, blue yellow, cyan, magenta. "Afterwards, the single sections of the colour wheel are being joined together again. The static parts of the image maintain their natural colour, whereas the moving parts produce new colours of time", the artist explains his technique, that is originally deriving from cinematic means. "The sum of the single shots is, in fact, more than just the lot", says Kaul who calls his new series "Chonochrome" (colours of time).
His former series of 360 degree pictures of studios, galleries and collectors' places has been developed from a similar technique. In this case, he performed a virtual pan-shot with his camera by digitally adding the different pictures he shot to a panorama.

Kay Kaul was a student at the Staatliche Kunstakademie in Düsseldorf and is master student under Prof. Klaus Rinke. He worked as a freelance film-maker and cameraman for artistic short movies, feature films and coverage. In the 1990s he delveloped and designed virtual realities, computer-assisted image formation as well as the required software. Since 1997 Kay Kaul works as a freelance artist.