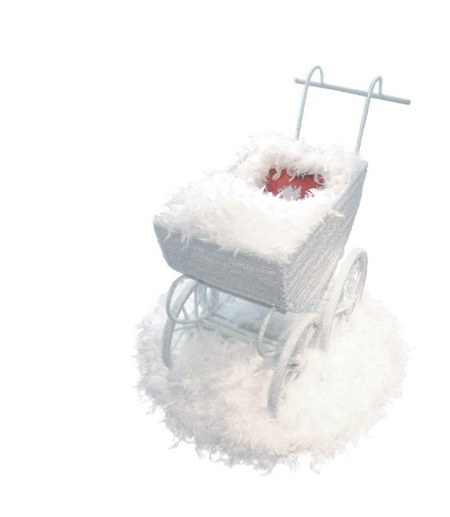 Art is magic, freed from the lie of being truth.
(Theodor W. Adorno)

The works of Mihoko Ogaki deal with existential topics such as birth and death, thereby discussing philosophical issues of human life. Starting from scientific and evolutionism theory-based knowledge, Ogaki raises metaphysical, ontological and cosmic questions. Regarding the genesis of human life from a biological point of view, the embryo emerges from cell fusion and becomes a viable human being through cell division. All genetic information is individually determined within the DNA whose molecular consistency can be decoded by science in detail. Nonetheless, science has its limits. Questions such as where do we come from and where are we going to? finally cannot be responded to in scientific terms.
Mihoko Ogaki scrutinises the origin of mankind in her installation before the beginning  after the end # 1  an embryo´s vision-. A baby carriage, draped with prismatic coloured pearls, is standing on a white cloud made of feathers and makes spheric sounds. As the observer looks into the carriage, he discovers a screen representing the embryo´s vision. The artist has scanned various drawings and made a film out of it with her computer. This brings us to Ogaki´s concept of prenatal perception: organic, cell-like formations float through visual space, reminding of microbiological organisms. The monotonous, computer-based sounds that seem to come from another world, impressingly underline the utopia of the image worlds. The harmony of sounds, images, material and colours makes us experience the contemplation of a dream world. Feathers are bedding the installation, symbolising softness, airiness and protection as well as eternity, since feathers outlast the death of its beings. Every single pearl is different, holding the rainbow´s colour spectrum. The artist has accurately assembled piece by piece to an entity. The multitude of the material, the images and the sounds forms the artwork. It leads us into transcendental fields of human life and urges us to ask for the things beyond the material world. The embryo´s vision is just as speculative as our imagination of life after death, which is preconditional to our belief in rebirth. Perishableness is sine qua non for becoming and emergence and determines the circulation and development of human life. Therefore, birth and death are no opposites for Mihoko Ogaki but form an entity.
Aspects of the non-explainable fascinate the artist who has dealt with facts and theories derived from natural sciences in detail. Thinking or feelings, such as joy, anger or mourning are based upon molecular connections. They may function microbiologically, yet they cannot be entirely explained. The multitude of things always sums up to an indivisible entity. The universe consists of endless numbers of elementary particles. Still, it constitutes a whole. So in this double sense, everybody is the whole world, the microcosm finds both sides of it completely in itself. And what it thereby recognizes as its own nature is the very same that also makes up the nature of the whole world, the macrocosm. (Arthur Schopenhauer, Die Welt als Wille und Vorstellung, Bd.I, § 29)
Mihoko Ogaki approaches the phenomena she brings up in her work analytically, coevally pointing out the impossibility to cover the world completely by means of science. Where science comes to an end, art turns into a medium asking existential questions whose aporetic is presupposed. Despite substantial progress in the field of prenatal research the embryo´s vision will never be decoded. A humans thinking and feeling, the harmony of body and soul defies scientific explanation. The autonomy of art is freed from objective conclusions. That is why the world we live in can turn deeply and substantially into the centre of consideration. This is Mihoko Ogaki´s approach. In Adorno´s sense, her art raises questions without claiming to know the answers. The artist makes use of topics like birth and death in order to examine philosophical issues of life. In 2003, Mihoko Ogaki has presented her work at the 57. Bergische Kunstausstellung at Baden Museum, Solingen and was awarded the audience prize. This, beyond doubt, mirrors human´s need to profoundly deal with its own existence.