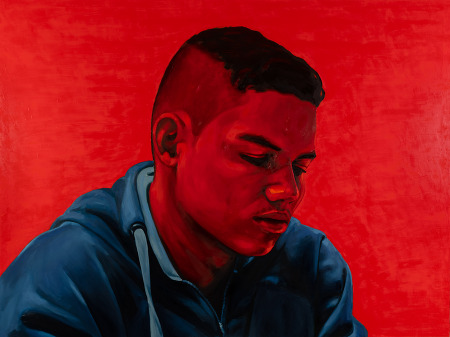 The painting of Éder Oliveira articulates itself in two distinct storylines: the context of violence in the Latin American cultural realm and the dialectic of the subordinate. We encounter a visual narrative that conveys the prevailing principles of drama as well as of seduction with an equal degree of clarity. We are speaking of painting that bleeds, that warns of the symptoms of human unrest and depicts an X-ray of societal malaise. It is no coincidence that his first exhibition in the Galerie Voss has the term opposition as its title. Oliveiras work represents a great breach of the rules, a gesture of opposition and an act of denunciation. Activism is not only programmatic, just like political art cannot be reduced to performance alone. Oliveiras painting encompasses the grammar of resistance and, at the same time, aligns itself with a systemic longing for explanation. It speaks in the name of the other, without the alien pain becoming a lampoon or a guarantee of media success. In the time of selfies, the portrait has evolved to become the focus of his work. Oliveira appreciates the portrait genre as a polyhedric and cubistic material, as a space that is entitled to speak about the I and the other, an area of research that  out of amazement and curiosity  facilitates questioning the capriciousness of the canon and the regime that determines what is permitted and acceptable. His works reveal an emotive engagement with those contemporary visages of Amazonian and indigenous descent, which constitute the pantheon of lateral subjectivity. There are penetrating surfaces, which attest to a virtually arrogant versatility and an unusual sense of freedom. In short, they are a hymn to sovereignty. Beginning with his interventions on urban walls, through his suggestive site specifics, up to his easel paintings, all his works trigger something moving in us, the unacknowledged vertigo caused by the pervasive violence. His works warn of a political and assertive beauty, pure necessary vehemence. The perplexity of these amplified countenances and their reflective quality refer to a culture anchored in the ecstasy of banality, that belies the meaning of the true and opportune. These giant red planes can be interpreted as open veins of a cultural hemisphere. A hemisphere that has always been the other, the cradle of otherness, the place where laughing and crying can be the same side of the coin. Oliveiras work could undoubtedly be a monument to the legitimacy of the alternative and marginal. Éder Oliveira was born in 1983 in Timboteua in the Amazonian state of Pará in Brazil. He earned an academic degree in Art Education  Fine Arts at the Federal University of Pará. Since 2004 he has been developing works that are concerned with the question of cultural identity. Oliveira creates site-specific works, interventions, and oil paintings on canvas. Numbering among the most important group exhibitions of the artist are the 31. Biennale of São Paulo (Ciccillo Matarazzo Pavilion, Ibirapeura, 2014), Pororoca: A Amazônia no MAR (Museum of Art of Rio de Janeiro, 2014), Amazonas, Ciclos de Modernidad (Cultural Centre Banco do Brasil, Río de Janeiro and Brasilia, 2012) and El triunfo de lo Contemporáneo (Museum of Contemporary Art Río Grande do Sul, 2012). Oliveira has received the following awards: The Lingen Art Award (2016), Bolsa Funarte de Estímulo à Produção em Artes Visuais (2014), the Prize in the Visual Arts of the Integrated System of Museums (2008) and the 2nd Grand Award of the Salons Arte Pará (2007). His works can be found in the collections of the Museum of Contemporary Art of Rio Grande do Sul, the Casa das Onze Janelas, the Museum of the Federal University of Pará and the Museum of Art of Rio de Janeiro. (Translated from Spanish into German by Julie Anabelle Beinke. Translated from German into English by Alexandra Skwara.)