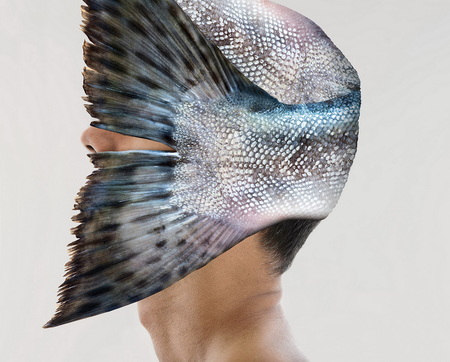 Sandra Senn (* 1973 in Baden/Switzerland, lives in Berlin and Baden) ranks among the most important Swiss artists working in the field of digital images. For many years now, her multifaceted work has attracted enthusiastic attention at home and abroad and can be found in important institutional and private collections. In her current solo exhibition with the poetic (German) title «Zwischen zwei Meeren» [Between Two Seas] she is showcasing new groups of works. Eroded monumental animals in the solitude of the wide seas articulate the finite nature of civilisation. Yet, who has vanished - humans or animals? Does the apparent end actually mean the end, or is this the dawn of a new consciousness?

Monumental animals in cast reinforced concrete and building remnants, which could perhaps be interpreted as research stations, stand as the decaying relics, of a vanished era, that have been abandoned in a vastness of drained seas. Parts of the animal bodies and buildings are eroded and broken. Rusted steel skeletons protrude in some places. Green algae have settled on the rough skin of the animals. A long time ago, someone must have erected them as imposing sculptures. Is this art, or are they monuments, or memories of erstwhile dreams? Yet, the former creators have vanished without a trace and it is not possible to detect any references to the narrative contexts. Sandra Senn has generated scenes from a fragile dystopia, however, their gloomy doomsday scenarios have been changed into ones of surprising astonishment. This is what distinguishes these works from many other dystopian works in contemporary art that celebrate technoid destruction.
The animals maintain their positions calmly and mutely in an emptied world - the apocalypse has moved on and the storm appears to have been weathered. While the animals have not passed through the nights of time unscathed, nevertheless, they are still standing even though they are ruins. The subtle pastel shades of the cloudy sky correspond to the emotional fragility that stands in contrast to their defiant appearance. The exact historico-cultural origins of the animals, monuments and building remnants remain indeterminate, yet their dream-like sweeps immediately leap out at you. It is scarcely possible to escape from their melancholy sensuousness. The power of these images lies in the dystopian emptying, the slowing down to a state of petrified standstill and in the traversing of time and space as if in a dream. Sandra Senn subtly allows the enchantment of the unconscious to shine forth. The crucial factor here is that the artist uses digital technology merely as a means to an end and she is not interested in demonstrating technical effects, as is so often the case with digital works. It is painting by other means, as she once said in her studio. Instead, she is interested in seeking out unseen inner images and following them in order to discover where they lead. Sandra Senn does not calculate but, instead, she relies on a dog that has been turned into stone, which is crumbling, on lions keeping watch that stand sphinx-like at the end of an unfamiliar sea and on a horse that has become rooted in an inhospitable terrain and is hardly able to stand up again. As mute oracles these animals constitute a mysterious memory of a lost age. Paradoxically, at the moment of the greatest desolation there is a stirring of a faint hope of a new tomorrow.

Another group of works with the allusive (German) title «Erahnengalerie» [Gallery of Vague Portraits] features enigmatic metamorphoses of portraits. Partly concealed as if behind a mask and partly spread over with colour, those who have been portrayed seem to be in the midst of a magical process of transformation. Sandra Senn challenges the clichéd notion that a portrait is a representation of a distinctive identity. The speed with which the faces have been affected by fish, feathers, or colour is the speed at which other transformations have to be expected. The images reveal multiple Is that find a meandering echo in the lyrical texts that have been put up on the walls. Sandra Senn confidently switches from images to language and, thus, impressively demonstrates a new facet of her versatile talent. In her short poetic texts, which also sometimes exhibit aphoristic qualities, a lyrical I emerges that, engrossed in itself, wanders alone through newly awakening countryside.
Markus Stegmann