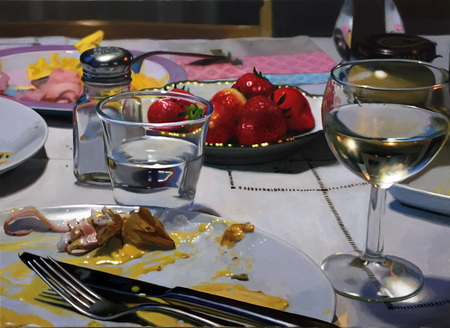 The development of Frank Bauer´s oeuvre is intimately intertwined with his interest in photography, which accounts for more than half the books in his library.

Bauer´s use of an episcope to transfer images to canvas places him in an important tradition. Two of his own favorite painters, Vermeer and Caravaggio, are both believed to have employed a camera obscura, as did such virtuoso painters as Canaletto and Sir Joshua Reynolds. The invention of photography dramatically expanded the possibilities, though many practitioners staunchly denied the use of photographs as visual aids. Bauer, in contrast, celebrates them. Indeed, he does not create a painting of a person or a scene with the aid of photographs; the photographs themselves are his subjects.

He has employed various kinds of cameras over the years, "from low-resolution mobile phones to high-quality roll-film apparatuses", though most of the photos were taken with a focal-plane shutter camera, the Nikon FE2. It is never the artist´s goal to capture some perfect moment or produce a technically perfect photograph. Imperfect specimens, often blurred, sometimes over- or under-exposed, present a far greater and more interesting challenge to his technical skills. A Bauer photograph draws its strength and authenticity not just from its reproductive accuracy, but also from its very nonchalance.

Bauer´s first still life, which represented a crucial turning point in his work, was a study of his own breakfast table - a theme to which he has repeatedly returned and one that resulted in a recent series of twelve remarkable small-format paintings.

With the breakfast-table studies, as well, the subject is not the set table in waiting that we encounter but the incidental ambience of a meal recently completed.

Formally, to be sure, Bauer´s paintings have far more in common with Photorealism than with the Pop aesthetic. Partly a reaction against the gestural excesses of Abstract Expressionism, the new movement hymned such banal American subjects as diners, house trailers, shops, and chrome-laden automobiles.

The author and gallerist Louis K. Meisel, the first important champion of Photorealism, once cited three essential requirements for inclusion in the movement: "1. The Photo-Realist uses the camera and photograph to gather information. 2. The Photo-Realist uses a mechanical or semi-mechanical means to transfer the information to the canvas. 3. The Photo-Realist must have the technical ability to make the finished work appear photographic." Obviously Frank Bauer meets the criteria with flying colors, including his use of an episcope to transfer the photographic image to canvas.

In spirit, Bauer´s approach is much closer to Hopper´s wistful, melancholy scenarios than to those of the Photorealists. The German artist´s depiction of two people in Hotel Room (2008) is intriguingly Hopperesque, including the separation of the figures in distinct planes of the composition. In mood, it relates to Hopper´s own Hotel Room (1931) and to numerous other works in which an individual is isolated in a claustrophobic space or a couple is present yet the two of them curiously detached from one another. An odd, sinister feeling hovers about many of the works - most obviously, in Nocturnal Garden (2010), but even the birthday still lifes from 2010 and 2013 could harbor dark secrets.

Though Bauer acknowledges an affinity to Edward Hopper, it was the Italian painter Giorgio Morandi who served as spiritus rector when he began to produce still lifes. He admired Morandi´s stringency, his subtly graduated tones, his compositional balance. But there were other sources, as well. As he still vividly remembers, a highlight of his peripatetic childhood was a visit with his parents to the Pinakothek in Munich, where he first saw the works of Dürer and Cranach. Later Caravaggio became a major point of reference, along with a very mixed artistic contingent that included Vermeer, Manet, Alex Katz, Balthus, and the minimalist Agnes Martin.