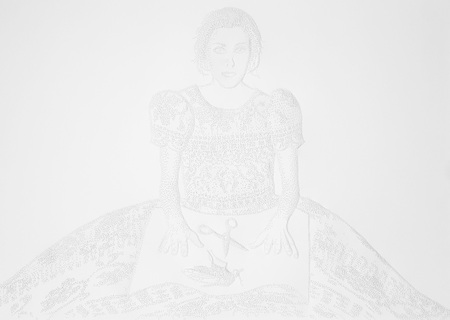 The Spanish artist Amparo Sard (* 1973) uses a variety of different media of expression for her work, such as drawing, video, installations and sculpture. In her drawings, Sard embroiders stories on paper and provides plastic forms with a corpus to desecrate the bidimensionality of the support it is being created on. It is an absolute monochromatism, white, reminiscent of silence and loneliness and exploring themes of identity and restriction. By using a unique form of pointillism, Sard creates works on paper as well as space-filling sculptures fashioned out of a wide variety of materials. Her works consist of thousands of pinholes, forming complex illustrations, which can be qualified as "pixeled embroidery". According to Amparo Sard, my works on paper can be considered from two different perspectives. On the one hand, the images (suitcase, pipe, chair, fly, woman etc.) explain something within the predefined square of the sheet of paper. This may be interpreted freely by the observer. However, on the other hand there is the language I use, a raised language. It is a language which speaks of beauty; however which also communicates with the evil. The experience of an uncanny feeling, for example, arises when something appears to be alive, but which in reality is dead, such as would be the case with a wax figure or robots. Or vice versa, when something that should be alive has become an object, such as, for example, an amputated arm. According to Freud, the unsettling foreignness in Amparo Sard's work has something to do with that which has been repressed and readopted: In the end it is impossible for the domesticated and homely to conceal both its pulse-dimension and its abyss-dimension simultaneously. In Amparo Sard's paper works and videos it is not the cheerful games which predominate, but instead danger, loneliness and silence. It could almost be said, that this presentation is nearly invented. These emotional impulses succeed in piercing the immaculate surface, In order to make fear transparent through an almost palpable plea. Works by Amparo Sard can be found in collections of the MOMA, New York, the Guggenheim Museum, New York and of the Deutsche Bank, Berlin and New York. Galerie Voss dignifies the works of Amparo Sard by organizing the first solo exhibition in Germany. The exhibition has been organized as a German premiere on the occasion of the Quadriennale 2010 in Düsseldorf. In Cooperation with Galleria Paola Verrengia, Salerno (Italy).