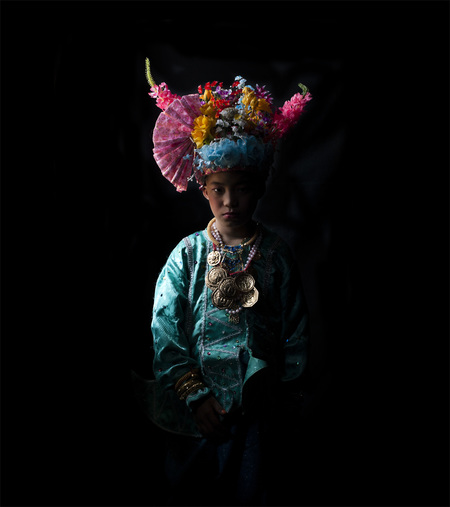 In Thailand there is an ancient custom by which boys between the ages of seven and twelve go to the temple for a few weeks or months. Their heads are shaved beforehand and the hair allowed to fall into a lotus leaf. The boys now wear crowns of flowers on their heads, their clothing is colourful and festive, and they experience something to which only rulers and monarchs are otherwise entitled: Their feet do not touch the ground for three days, since they are carried everywhere, In her third solo exhibition at the Galerie Voss, the Berlin-based photo-artist Iwajla Klinke presents new works from India, Mexico and Thailand that emphasise her serial working style. The title Oneironauts is an onomatopoeic reminder of the ancient Argonauts and plays on the theme of travelling between inner and outer worlds - an essential feature of all of Klinkes works. The word oneironauts refers to people who travel within dreams, who have the gift of lucid dreaming. They are aware that they are dreaming, can control their dreams and even move around within other peoples dreams. Two works from the Thai series Oneironauts," from which the exhibition takes its title, will be on view. The boys, adorned with feminine-looking make-up, symbolise a larger whole that touches their individual personalities and yet far transcends them. The colourful splendour of their costumes is a celebration of decadence, a sort of final fling before the austerity of the monastery; at the same time, it anticipates the sensuality that these boys will later be able to experience as men, once they have left the monastery. Another series - Huastecan Cherubim - shows three children in front of a carnival parade. Klinke photographed them in Mexico at the start of this year. Make-up has been applied to their entire bodies and, like watchmen, they hold long staffs in their hands. Here one discerns the presence of Christian practices as well as traditional rainmaking magic and youthful street culture. The transformation of the two Indian youths (Therian Infantes) is the most recognisable. Their entire bodies have been painted to make them look like feline predators as an expression of their emerging manhood. It is as if they themselves have become something wild that has to be both subdued and safeguarded. In Klinkes photographs they have removed their masks, underscoring their dual nature as humans and ritualised animals. The two Indian images are part of Klinkes extensive "Tiger Project," in which she explores this form of initiation rite in various cultures and thus highlights its universal aspect. In the polyptych entitled Boy's Lenten Veil" she has drawn on the iconography of multi-panelled medieval altarpieces and Passion tapestries and translated these into a Mexican superhero comic with sacred and profane elements. The popular form of wrestling known as lucha libre also plays a role here, as well as street-dance and Easter processions. The deep seriousness and the proud stance of those portrayed in Klinkes images are reminiscent of the portraits by late 19th century studio photographers or Golden Age painters. The artist searches for and finds her subjects around the globe; a black cloth and camera are all she needs on her travels. She is especially fascinated by the age shortly before puberty - the leaving behind of childhood and the imminent transformation. Prior to devoting herself fully to artistic photography, Iwajla Klinke worked for television for a time, making documentary films for 3sat and Arte. These years left her with a great yearning for stillness and for expression without words. The children and adolescents whom she photographs intuitively capture the sacredness of the moment. Those who view Iwajla Klinkes art can also share this experience. Text: Simone Sondermann